For the Thracia 776 character, see here.

Joe J. Thomas
[view]
“A man can't run forever. You seem like the sort who'll eventually have to deal with his own burdens.”
—Deen

Deen is a playable character from Fire Emblem Gaiden and its remake, Fire Emblem Echoes: Shadows of Valentia.

Born in a provincial city in Zofia to a long line of soldiers, Deen underwent his father's rigorous training since youth, joining the Zofian Army when he came of age. Becoming engaged to a feudal lord's daughter, he was set to inherit the lord's peerage. However, while he was away for a mission, the mansion was attacked. As he rushed back upon hearing the news, he himself was attacked and lost his left eye. Reaching the mansion, he found his wife, whose form had completely changed. To kill his beloved fiancee and enact revenge on the man who took his eye, he took the lord's heirloom, the Brave Sword.

Like Sonya, Deen eventually works for Grieth as a member of the Grieth Pirates, despite hating him due to his evil deeds. If Sonya is defeated by Celica, Deen will retreat into Grieth's Citadel. After Grieth's death, he will join Celica's army, noting that he knew that Grieth would have gotten what he deserved eventually. After the war, he vanishes, rumored to have gone to a continent to the south in search of new conflicts.

Outright stating in his first base conversation that he doesn't do small talk, Deen only starts stating his own opinions on things after others persist on the matter. When he does so however, he is shown to have a smart and savvy side to him.

Moreover, he seems to have to have similar beliefs to Duma, as he states in the final map that he while doesn't find a world ruled by might unappealing, he refuses to bow down to him.

All things considered, Deen is a very threatening unit. He starts with high HP, Skill, and Speed and above average Strength. His offense is undoubtedly quite good at the time you obtain him as he only lacks Luck. His defensive stats, on the other hand, are bad, but that is normal for characters of his class. While his bases are quite good, he unfortunately has the third worst overall growths in the game (only Mycen and Nomah being worse), so he will generally be reliant on his Promotion to Dread Fighter for stat gains as he is unlikely to get many stat ups outside of HP.

One of the biggest problems for Deen has absolutely nothing to do with him as a character and everything to do with the fact that you have to pick between him and Sonya. While Deen starts out with better bases than Sonya, he will lose big time in growths as Deen has one of the worst overall growths in the game while Sonya has one of the best. Sonya also winds up being the best of her class, while Deen will wind up the worst of his. Deen also suffers some redundancy issues in that you will already have 3 Mercenary units available to you in Celica's route, at least one of which is probably better than Deen by that point. However, this can be remedied by transferring some Mercenary units to Alm, who lacks them.

Though Deen may have some shortcomings when measured up to Sonya, he is still a strong unit. Even though Deen suffers poor growths, he is in a very strong class with strong base stats. Dread Fighters are deadly, no matter which character promotes to it: having an army full of them is not really a negative. Deen also comes with a more valuable item in the Brave Sword (which, in Gaiden, acts more like a Killing Edge), whereas Sonya comes with a more generic Steel Shield.

Deen turns out to be a pretty good unit. The only real downside he has is that picking him means you lose Sonya, and that is not an easy choice to make.

During Chapter 3, Celica must battle Sonya instead. After Grieth's death, talk to him in Grieth's Citadel.

Deen returns in the remake largely improved, with all of his growths except for luck and resistance being substantially improved. Not only is his offense solid, but his physical defenses have been improved after he levels due to his very high HP and defense, making him particularly more durable than Jesse and Kamui, two other characters that can promote into a Myrmidon, though his low luck often leaves him vulnerable to inopportune critical attacks.

Offensively, Deen is quite competent; although his base strength isn't particularly noteworthy, he has a great strength growth rate that will give him reliable power fairly quickly. Although the Brave Sword can be obtained in other methods than recruiting Deen (one of which includes getting it as a drop by defeating, instead of recruiting him), a single copy of it alone is very useful, and Deen tends to have strong enough offenses to abuse it considerably. It may be better for him to opt into using a higher might weapon instead, especially in the endgame where his skill alone is enough to land critical hits often.

The recruitment of Deen is a choice between him and Sonya, and this time around, he proves to be the better overall addition to Celica's army. Although there are three recruitable Mercenaries in Celica's route that can compete with Deen, he has considerable advantages over them, having better defenses than Kamui, better strength than Jesse, and better strength, skill, and speed than Saber, though his low Luck can still be problematic. In addition, both Mae and Boey have been improved in Echoes and generate far more competition for Sonya.

Overall, Deen proves to be one of the most competent members of Celica's army, and while he lacks Saber's availability for the early game chapters, he makes up for it with extremely solid growths that allow him to outpace Saber in the lategame. His starting level allows him to quickly promote to Dread Fighter, allowing him to tank magical hits that physical units normally struggle with, so as long as one is wary of foes with extremely high skill he'll prove to be one of the strongest units for the rest of the game.

Bladed Sandstorm
A skilled mercenary who once came to Celica's aid. Having been invited to the Hatari festival, he decided he would see it for himself. Appears in Fire Emblem Echoes: Shadows of Valentia.

"After the war, he unexpectedly disappeared along with the Brave Sword.

Rumors say that he crossed over to a continent to the south in search of new conflicts."

Shortly after the war, Deen vanished without a trace, along with the Brave Sword. No record exists of his whereabouts thereafter.

Deen is illustrated in the trading card game Fire Emblem Cipher with the following cards: 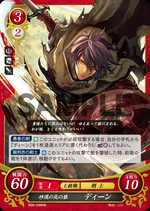