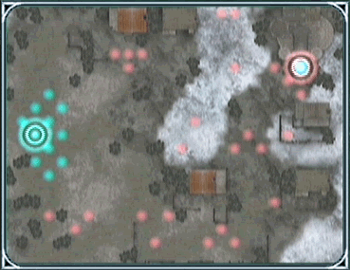 Chapter script
[view]
“The kingdom of Daein lies on the northernmost edge of Tellius. Its coastline is bathed in the icy currents of the northern sea, and frigid winds howl inland with terrible ferocity. As a result, Daein winters are raw and brutal-- ice and snow scour the land, leaving frozen scars in their wake. Through these blizzards, General Ike and the Crimean army press ever forward. Begnion's imperial senate may have lent Crimea troops, but even they doubt that the army can successfully fight off Daein. Yet somehow, Ike and company defy all odds and capture victory after victory. Embracing both Princess Elincia's dream of a liberated Crimea and the tragic history of his parents, Ike marches in grim silence.”
—Opening Narration

Defending Talrega is Chapter 20 of Fire Emblem: Path of Radiance. In this chapter, the Greil Mercenaries and their allies must move to take the floodgates on a major river in Talrega. The Daein forces have, on Petrine's orders, opened the gates and flooded the valley below. Wishing to avert a crisis, Ike and the company tackle the Daein forces there. They are led by Shiharam, Jill's father and Haar's commander. Shiharam hates the tactics Petrine forces him to use, but knows he has no option but to fight. However, he insists that Haar not participate in the battle, because Shiharam knows he will die, and wants Haar to look after the survivors and the families of the fallen. Haar obeys his commander's wishes and departs, leaving Shiharam to fight. True to what he felt before, Shiharam does not survive the battle. He confronts Ike's forces and receives an honourable battle, and an honourable end. At the end of the chapter, Haar notes that there were very few survivors from Shiharam's soldiers. He then decides he will exact vengeance on Petrine, who he blames for Shiharam's death.

Retrieved from "https://fireemblem.fandom.com/wiki/Defending_Talrega?oldid=452734"
Community content is available under CC-BY-SA unless otherwise noted.