Christine Marie Cabanos
[view]
“You know better than anyone how I was born with a gift. All that natural talent, and yet you still want me to defer to everyone else. It's not my fault they work twice as hard and only end up half as good! I mean, I'm risking my life out here too, you know!”
—Delthea to Luthier in Shadows of Valentia

Delthea is the descendant of a powerful mage and holds great talent in magic, more so than her older brother Luthier.

A Duma Faithful necromancer Tatarrah kidnapped Delthea and brainwashed her into being his Witch servant (in Echoes, it's implied that it was Slayde who gave the information to the Duma Faithful on where she lived). Luthier asks Alm and the Deliverance to help him save his sister. They encounter Tatarrah and kill him, freeing her from the necromancer's control. Confused and wondering where her brother is, she flees the battlefield into the floodgate where she reunites with Luthier and meets Alm and the Deliverance. She joins the army to end the war once and for all. After the war, she voluntarily decides to seal her magic and lives a happy life as an ordinary woman. In Echoes she also marries a nobleman.

Despite being naturally gifted with magic, Delthea is not interested in training her abilities, using it in Alm's group because she likes helping him, only to seal it after the war. She is bright and cheerful, though a bit of a selfish young girl. Constantly making fun of Luthier, her supports make it clear that she does love him and would like to be friends deep down, quick to defend him when Clair does the same.

In Chapter 3, talk to her at the Water Gate if she survived the previous battle.

Delthea is an extreme glass cannon, and an above average Magic unit if trained. She starts with excellent overall stats for a Level 3 unit (including a whopping 15 Resistance, the most of any Magic user aside from the Pre-Promoted Tatiana) and comes equipped with a Prayer Ring, which guarantees a critical hit if the holder is under half health.

On top of her good stats, she has an extremely aggressive spell list with lots of hard hitting 2 range spells. She starts with Aura, which is already one of the most powerful spells available to Mages in Gaiden, and if you level her a lot she will eventually learn Ragnarok, the most powerful spell in the game, and she is the only character aside from Celica able to learn it.

However, Delthea does have several downsides to her. She is one of the few Mages in the game that does not learn Thunder (Nomah being the other, though Tobin and Atlas lack it as well if you choose to make them Mages), and thus does not have a spell with 3 range. She also has subpar HP growth and terrible Defense growth, as well as average Speed growth. On top of this, almost all of her spells deduct lots of HP when used other than her base Fire spell, which can burn through her low health quickly. All of these factors combined means she needs to be extremely well protected in order to be effective. But despite these weaknesses, she is capable of dealing more damage than any other Magic unit in the game and is one of the best Magic units.

*Due to equipped Prayer Ring

In Fire Emblem Echoes: Shadows of Valentia, Delthea has received a rather substantial change statistically, focusing more on Attack, Speed, Luck and Resistance whilst losing out in HP, Skill and Defense. Arguably, she qualifies for the Est archetype, as her explosively high growths and potential are moderated by her (comparatively) poor start. Apart from receiving the moderately useful Rewarp skill at Level 10 Priestess/Saint, her spell list remains unchanged from Gaiden... which is an issue, since she continues to lack any 1-3 range spells. While Seraphim remains an effective combat spell, Aura and Ragnarok may become more a hindrance than a help to her due to their high HP costs and weights, and since she lacks Thunder and Sagittae as aforementioned, she will require the investment of a Mage Ring to bring her up to speed and reverse her low movement even after promotion. Speaking of her promotion, it may be difficult to bring her to that and therefore partially mitigate her awful bulk due to promotional gains, as she starts out at only Level 3 (although high bases relative to her level help with that somewhat). Finally, she has significant issues with her Enemy Phase performance due to her bulk problems, therefore ensuring that she be heavily protected from enemy fire and most of her action be mitigated to the Player Phase if she is to be kept alive.

Despite these glaring flaws, however, if trained properly, her offense is nigh-unmatched due to her combination of high bases and growths, although such investment may not be possible in, say, LTC or efficiency runs. To conclude, Delthea is the casual player's best ally due to her raw power, and the efficiency runner and unit analyzer's worst enemy as a result of her bulk issues and poor spell list.

Delthea joins Heroes as a remarkably strong infantry blue mage. While she is the physically frailest unit out of all units in Heroes, she is the strongest offensively for all blue tome users, beating out Linde by one point. Delthea is similar to Linde, best suited for a purely offensive role and should avoid being initiated on if at all possible. Her tome Dark Aura grants a +6 Atk buff similar to Hone Attack to direct combat allies adjacent to her at the start of the player's turn giving her a supportive flexible role.

Her starting kit cements her offensive role for the most part including Death Blow to increase her player phase power and Drive Attack to stack on Dark Aura and further empower her allies. Her only oddball skill is Miracle which can patch up her low physical bulk by giving her an opt out and survive otherwise fatal damage. Delthea is an

Delthea's overall Physical bulk is the lowest in the entire Heroes cast. Even Sword units with color disadvantage can plow through her low physical bulk with little trouble. If she is facing a Distant Counter Greend or Blue, Delthea has very little chance of surviving their counter attack if they survive her own blow. In general, Green units exploit the advantage and low bulk to utterly decimate her.

Delthea can maintain her Dark Aura tome or take a standard Blárblade tome, both of which compliment her playstyle, though the former is more supportive while the latter is more offensive.

Draw Back or Reposition are excellent ally manipulation skills. Delthea can maintain her Skill A and C in either set and can take Desperation which is a standard skill for most offensive oriented mages. If playing with Dark Aura, Draconic Aura has a fast cooldown and uses her tremendous Atk stat to its fullest while Moonbow or Glimmer syncs well with Blárblade's buff increases.

Tatarrah's Puppet
A naturally gifted mage who has fallen under the control of Tatarrah, of the Duma Faithful. Appears in Fire Emblem Echoes: Shadows of Valentia.

“Hah! It hurts over here... What am I doing in a place like this? Help! Big brother Luthier! --”
—Delthea's quote if Tatarrah is killed

"After sealing away her magic, she lived on happily as a single woman."

"After the war, Delthea decided to lock away her magic and pursue a wild and happy life as an ordinary woman. She found herself the perfect husband at court, but made a point to return to her village often, where she would liven things up with tales of her brother."

Delthea is illustrated in the trading card game Fire Emblem Cipher with the following cards: 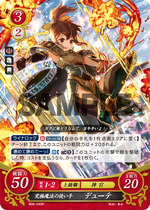 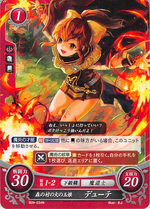 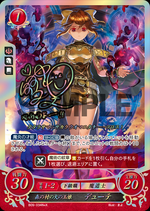 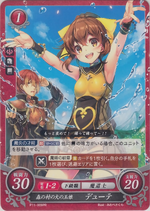