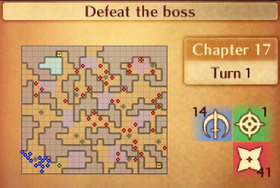 Chapter script
[view]
“Corrin enters Hoshido and discovers that a Nohrian ally, Mokushu, has been under attack for day. Corrin rushes to assist their besieged troops.”
—Opening Narration

Den of Betrayal (裏切りの魔窟 Uragiri no Makutsu lit. Thieves' Betrayal in the Japanese version) is Chapter 17 of Fire Emblem Fates in the Conquest Version. This chapter takes place in Cave in Mokushu.

The objective of this mission is to kill Kotaro; you do not have to rout all the enemies.

There are several caltrops placed around the map. If any unit without Locktouch is standing on a caltrop tile, they will lose 3 defense, 30 evasion and will take 30% of their max health as damage at the start of the player phase if they are still on those tiles. The caltrops can be disarmed by units with Locktouch. To ensure the enemies are not severely weakened by them, every enemy has Locktouch.

All Master Ninjas come with Poison Strike, all Swordmasters come with Lunge and all Mechanists come with Natural Cover, regardless of difficulty. Some Automatons carry Elbow Room, some Samurai carry Quick Draw and some Ninja carry Vantage. Be careful of several specific anti-weapon and anti-unit weapons, such as Armorslayers and Axe Splitters, and the appearance of the first Silver weapons, like Silver Shuriken and Silver Katana.

On Lunatic Mode, this chapter can be very irritating. The normal Ninjas will come with Vantage and Poison Strike. All of the Master Ninjas will also get Grisly Wound in addition to their Poison Strike, making them incredibly dangerous both ways. If the player cannot kill them in one turn during their phase, they will lose 20% of their maximum health from Grisly Wound's post-battle effects. During the enemy phase, if the player cannot kill the Master Ninja in one turn, Grisly Wound stacks with Poison Strike's post-battle effects, resulting in 40% of their maximum health being removed. Therefore, it is required to bait as few enemies as possible towards your position, since getting surrounded by multiple standard and Master Ninjas will result in a very quick death.

While not needed, a Golembane unit can help take out the numerous Automatons and Mechanists on the map, as it deals bonus damage to them.

Saizo carries Immune Status on him, which prevents post-battle damage and debuffs inflicted on him. However, do not rely on him to take out the enemy alone, as he will most likely be defeated if he does. If Saizo survives the battle, he will reward you with a Speedwing; however, since he will most likely suicide on the enemy, it is best to cramp up one of the passageways so that he will be unable to move if you really want the Speedwing. He can be held in place by using 7 units as a roadblock, allowing you to progress through the map at your leisure, although extra care must be taken with the reinforcements that spawn. Saizo will prioritize taking out any active caltrops on the field as he slowly makes his way to the boss, unless there are enemies in his way. Rescue staves may also be used on Saizo, keeping him away from danger (and away from stealing experience from your units).

Kotaro is at the other end of the map, surrounded by a clump of caltrops. On Normal, he has Trample, meaning that he does five extra damage against a nonmounted unit. On Hard and Lunatic Modes, he gets Duelist's Blow (giving him 60 extra avoid when he attacks (30 from Duelist's Blow and 30 from the throne tile) in addition Grisly Wound. Kotaro's throne is surrounded by caltrops, so it is best to have a unit take it out first so non-Locktouch units do not suffer from its effects.

The Dragon Vein makes an appearance in this chapter, and will open and close protrusions. This means when used, it will cause all inactive protrusions to rise and all active ones to fall. Using this is recommended to prevent Saizo from accidentally suiciding and to limit the flow of enemy hostiles attacking you. Units that are standing on an inactive protrusion tile when activated are able to move out of it in either direction.

Note: This applies to Hard and Lunatic Mode.

Note: This only applies to Lunatic Mode.