Dan Woren
[view]
“Why should I fear a goddess too busy sleeping to leave her temple? The age of worrying about what the gods think of us has come to a end. The kingdom of Zofia needs a strong will to set it back on course—MY will.”
—Desaix in Echoes: Shadows of Valentia

Desaix is an enemy character in Fire Emblem Gaiden and its remake, Fire Emblem Echoes: Shadows of Valentia. He is the treacherous chancellor of Zofia, and a major antagonist in Gaiden. He is 43 years old.

Desaix first came into power when an assassination attempt on King Lima IV was exposed and the perpetrators–a branch of the royal family–were executed along with their kin. Desaix, who claimed to have prevented the plot, received Lima IV’s recognition and started to participate in governmental affairs. Mycen, a high ranking general of Zofia, made multiple attempts to reason with Lima IV, but he was stopped by Desaix at every turn. Slowly, Mycen was distanced from the royal family and Zofia Castle. Of course, the general populace was not pleased by these events, but the land's bountifulness made them uncaring as long as they could live in peace, which eventually caused Desaix’s political rise to go unchallenged.

With the king now as Desaix’s puppet, any criticism could be whispered to him and it would lead to immediate imprisonment or even execution. To further consolidate his power, Desaix had conspired several suspicious deaths within the Zofian royal family, then framed Mycen for his crimes, banishing him as a result. Although some Zofian officers stood in his defense, because Mycen originally hailed from the Rigel Empire, his departure was never scrutinized.

As the years passed, the corruption within the Kingdom deepened further, since after Liprica’s death, Lima IV’s philandering habits only got worse, eventually leading to the royal villa the remaining children, including Anthiese and Conrad, lived in being set ablaze. Thanks to Mycen, who came rushing to her aid, Anthiese escaped, while it was later discovered that Conrad fled to the Lost Treescape in Rigel. Unfortunately, all of the villa’s other residents were slain by assassins hired by Desaix.

In the year 398, after Zofia rejected Rigel's request for assistance following a famine and drought, both nations entered all-out war. For over a year, the inexperienced Zofian army was repeatedly defeated by the overwhelming Rigelian forces and Rigel steadily crept into Zofian territory. Desaix managed to contact the upper echelon of the Rigelian Army and negotiated a cease-fire in exchange for a large compensatory sum of gold, Desaix to be appointed as Zofia’s chancellor, and autonomy be retained. In truth, he had sold Zofia to Rigel. Collecting wealth and food from the citizens in the name of compensating the empire, heavy taxes were imposed across the nation, with those who opposed their tyranny or were suspected of doing so being immediately caught and executed. The Rigelian Army remained garrisoned in Northern Zofia and tensions continued to grow.

A year after, Desaix triggered a coup d'etat and the the remaining members of the Zofian royal family, including Lima IV, were killed, with the missing Anthiese as the only survivor. Meanwhile, away from the capital, villages and the like became playgrounds for Desaix’s thieving soldiers, giving rise to desperation and poverty, while ruffians gathered and spread in influence.

Around this time, a resistance led by Clive was formed in order to oppose Desaix, though he manages to capture the Zofian knight Mathilda in order to use her as leverage to force his surrender. Eventually, Alm took control of the resistance and reclaimed Zofia Castle. What seemed to be Desaix, however, turned out to be no more than an impostor (which is revealed if the player kills Desaix prior to Slayde). After the battle, his foothold in the Zofian capital was no more. Leaving some of his men behind, his remaining forces retreated back to his fortress in Northern Zofia, while he took the royal sword with him for unknown reasons. When Alm's army arrives in time to save Mathilda, he orders for her to be executed slowly with arrows. Having foreseen their army's approach, Desaix had requested aid from Rigel in order to finally thwart the Deliverance. Despite the aid, however, Alm's forces attacked the fortress and Desaix is killed, with Desaix cursing Mycen for giving the Kingdom to Rudolf's Pup, having discovered his identity earlier.

Attempting to fight him at Zofia Castle is less than recommended, due to both his superior third tier class, and his massive army. You may very well stand a chance at defeating him and taking his dragon shield if you have promoted one of your villagers, namely Kliff, into a mage. Even with a mage though, beating him is no easy task. As mentioned before, Desaix has a massive army. Dealing with them is hard enough, and another ordeal is not killing Slayde (as killing Slayde forces Desaix to leave). Pick off the enemy one by one. Have Silque mend any wounds. Ultimately kill Desaix with magic, archers, and Alm, Lukas, or Forsyth. Also, another good idea would be to exercise your party members in the Rebellion headquarters before coming to the castle. Recommending an average of at least level 8 across the board if you're going to attempt this.

Here, unlike the first battle, it is obligatory that you kill him. This time he has several Armor Knights and Archers from Rigel with him. There will also be a Sorcerer in the forest, casting Fortify (who you may want to pick off with Clair at the start of the fight, to prevent Desaix from healing) and an Cantor in the upper right corner summoning Revenants. Finally, Desaix is a Baron, making him pretty tough to beat. By now however, you should have Luthier, who proves to be a great asset in this battle. Simply have him use Excalibur on the Armor Knights, and finally on Desaix. Support him with Alm in the front, and keep Silque nearby just in case either of them is damaged. Also, a very important note: Be sure to pick off the Archers quickly, to prevent Matilda from being executed (as she cannot fight back). Once Desaix and the Armors/Archers are killed, the rest of the map should be very easy to complete.

“Hehehe, Foolish bastards. What you just defeated is Lord Desaix's double. Lord Desaix has already returned to his own lands. I'll pay you back in full for this someday. Until next time!!”
—Desaix's defeated quote in Chapter 1 at Zofia Gate in Gaiden
“Urgh! N-no… W-wait… You have the wrong…”
—"Desaix"'s defeated quote in Chapter 1 at Zofia Gate in Echoes
“D-don’t think you can gloat yet… You thought you defeated Desaix? Ha! That was just a double. The true chancellor has retreated to his fortress. And now it’s my turn. I’ve no intention of dying here with you maggots!”
—Slayde, if the player defeated Desaix in Chapter 1 on Zofia Castle in Echoes
“Gr... Mycen! Is he planning to Give Zofia to Rudolf's brat–? Damn traitor!!”
—Desaix's death quote in Chapter 3 in Gaiden
“Damn you, Mycen… You think to…hand Zofia over to Rudolf’s pup…? T-traitorous dastard…!”
—Desaix's death quote in Chapter 3 in Echoes

Desaix appears in the Fire Emblem Gaiden manga. His design slightly differs from his in-game portrayal, where he has a beard. During the manga, he loses his eye in battle and kills Kliff, one of Alm's soldiers and friends. As punishment Alm, Gray, Tobin and Clive stab him dead, then have his head put on a pike. 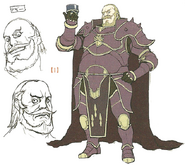 Concept artwork of Desaix from Echoes: Shadows of Valentia. 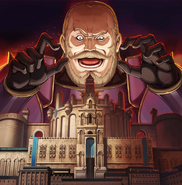 Cutscene still of Desaix in Shadows of Valentia. 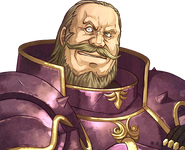 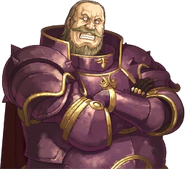