Desert (砂漠) is a terrain type that often features in the series. It usually grants a small Avoid bonus, while greatly decreasing the movement of units, especially those riding on horses or wearing heavy armor. In most games, magical units (except those who ride horses such as Valkyries) can walk on this terrain type without any movement reduction. According to Sephiran in Fire Emblem: Path of Radiance, the spirits employed by magic units give them better footing.

For armored units (Knights and Generals) and horseback-mounted units, it takes 4 movement to traverse a Desert space.

For other non-magical, non-flying units, non-Thief units, it takes 2 movement to traverse a Desert space.

For magic users, flying units, and thieves, desert terrain has no movement penalty.

Most maps with desert terrain also contain various Hidden Treasure items, which are often very rare and valuable. The chance of finding hidden treasures vary from game to game, but primarily rest on the Luck or Skill stat.

In Fire Emblem: The Blazing Blade, it is the only terrain that has reduced movement penalties while it rains, which actually makes it more easily traversable. Unfortunately there are no maps with rain that feature this terrain. 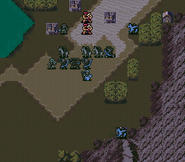 A Desert in Fire Emblem: Mystery of the Emblem. 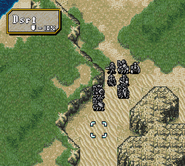 A Desert in Fire Emblem: Genealogy of the Holy War. 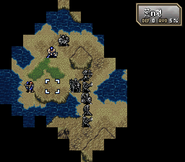 A Desert in Fire Emblem: The Sacred Stones.