View source
watch 48:53
'Fire Emblem: Path of Radiance' - Chapter 8
Do you like this video?
Play Sound 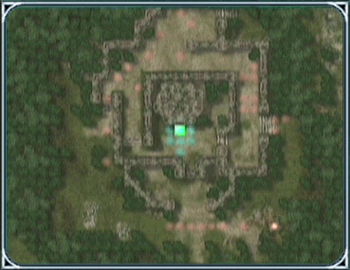 Despair and Hope is Chapter 8 of Fire Emblem: Path of Radiance. It is a defend chapter, meaning the player must secure their fort against enemy troops for eight turns in order to satisfy victory conditions. When this chapter starts, Gatrie and Shinon are absent as they depart out of jealousy for Ike taking up leadership in the Greil Mercenaries.

These reinforcements differ slightly when on hard mode

Beforehand, all units should have Vulneraries, since your units are defending. It is best to split the units into three groups to guard the three entrances. Ike should head west in order to recruit Ilyana, along with Mia and possibly Soren. Titania should equip a Poleax or ranged weapon and go south to take on the mounted units, retreating when necessary to keep any from charging past. Oscar and Boyd should guard the east entrance, and it is recommended that Boyd be given the Hammer to deal with the armored units, as well as giving both units ranged weapons with full uses. Rhys should remain in the center area, healing Ike, Mia, Soren, Boyd, and Oscar when they need it, although the latter should be done with care, as some of the enemy archers have Longbows.

In the east, it is ideal to put the stronger unit of Oscar or Boyd in front so he can endure more hits, and create a better line of defense. However, both units should be next to each other for the critical bonus they get from their bond. In the south, Titania should be careful not to move too far to expose the entrance for any enemies/reinforcements during the first couple of turns. In the west, Ike, Mia, and Soren need to eliminate the opposition quickly so Ike can reach Ilyana without anyone dying. However, with the three having low durability at this point, it can be rather difficult having to deal with several soldiers and myrmidons each turn, and the player should be ready to use several Vulneraries up just to survive.