Chapter 16: The Atonement (Path of Radiance)

Devdan also known as the alternate persona Danved, is a playable character from Fire Emblem: Path of Radiance and Fire Emblem: Radiant Dawn.

Devdan is introduced in Chapter 16, where he is forced to work as a guard to Duke Tanas. As he later learns, to his horror, of Duke Tanas keeping Laguz as slaves from Rolf, Mist, Soren or Tormod, he promptly switches allegiances and enlists into Ike's forces, citing an inability to "forgive such callous and unjust actions".

In the next chapter, Devdan is out admiring the flora growing in an unnamed garden when Ike shows up and engages him in a conversation. He takes the opportunity to question Ike's opinion on the beauty of the plants, to which the latter curtly states that they are "all right". Devdan then expresses disappointment at Ike's "boring" reply, advising him to be more appreciative towards the more mundane things in life by "looking hard enough". Ike replies by bluntly asserting that he does not have the time to be "open to such things", and can only think about "defeating Daein". Evidently unimpressed and unhappy with Ike's second response, Devdan leaves after stating that Ike will "wear out before the fighting begins" if he is too "focused on preparations".

Devdan will then stay on and fight alongside Ike's army until the Mad King Ashnard is defeated. Before parting ways with the army, he expresses relief at the war finally ending, as he "prefers the peace and quiet".

Danved joins in Chapter 2-3 of this game , he offers to assist Geoffrey in charging Castle Felirae, proclaiming that he is "not a citizen of Crimea" and can "fight like ten men". When Geoffrey responds by greeting him as Devdan, Danved asserts that "Danved is definitely not Devdan", and that "many people often make [the] mistake" of mixing the two up. Dumbstruck by Danved's bizarre display of eccentricity, Geoffrey is momentarily stunned, whereupon Danved goes on to shower himself with praise, claiming that he can fight "like a bear" and "like a tiger", and is thus "pretty amazing".

Later in Chapter 2-F, Danved arrives in Fort Alpea in the nick of time with the Royal Knights to serve as reinforcements to Elincia's stranded forces.

Danved is later spared when Ashera casts her judgment upon Tellius. He can then be brought into the Tower of Guidance in order to reverse this judgment.

In the epilogue of Radiant Dawn, Danved will open a comedy act that is reputed to be able to make practically everyone and anyone burst into peals of laughter.

Devdan is a rather amusing individual with an eccentric nature, a trait which is further accentuated by his third person speech. He shows an interest in helping younger members of the army reach their potential. He also enjoys playing tricks on other people, expecting them to react positively to them. However, his pranks often has the reverse effect, scaring or confusing them instead of cheering them up. This may be observed in his support conversations with Largo, where he introduces "Nadved" as a picture he drew and voiced.

Despite the fact that Devdan and Danved are identical in both looks and mannerisms, Danved outright denies all suggestions that he is in fact Devdan. Despite Danved's denials, he will receive bonuses to any stats that Devdan has managed to cap in Path of Radiance, alluding to both characters being connected in some way.

Devdan can serve as a solid unit, as he has competent growths in HP, Strength and Defense. Oddly enough, his base Magic stat is rather high, a trait that is further accentuated by a competent growth rate in said stat. This thus makes Devdan a good candidate to wield the Flame Lance. However, his speed is a bit low, which can give him issues doubling opponents; leveling him while he has the Knight Ward may fix this, as equipping this increases Devdan's speed growth rate by 30% for as long as he has it equipped.

Danved suffers from poor availability, and only appears in select chapters in Part 3. His stats are very well-rounded, but may face difficulties in promoting into a Sentinel before the start of Part 4. If the player decides to use him nonetheless, it is recommended to exploit his unusually high Magic stat by assigning the Imbue skill to him. One way of promoting him in Part 3 is assigning Paragon onto him, as his growths are well-rounded enough to not suffer from inefficient "natural" leveling. He has the highest HP and Luck, but lowest Skill among the three halberdiers. His Strength, Speed, Defense, and Resistance are in the middle between Nephenee and Aran. Compared to Nephenee, he has lower Speed, Skill, and Resistance, but higher HP, Strength, Defense, and Luck. Compared to Aran, he has lower Strength, Skill, and Defense, but higher HP, Luck, Speed, and Resistance. Prior to promotion he will most likely cap HP, Speed, Skill, and possibly Strength, Defense, Luck, and even Resistance and Magic. He will have trouble capping these stats as a Sentinel, but due to his relatively low starting level possessing bases not far from being capped as a Halberdier, he can possibly possess all capped stats just before promotion.  As stated before, Imbue is a highly useful skill on him, and due to his high HP and fair Defenses, Danved will not die easily. This is further accentuated by his high Luck and fair Speed. His offense may not be the best, but it's nothing to laugh at. Overall, he's one of the most well-rounded characters possessing high stats and may face some difficulty in use due to his relatively poor availability, but this should not stop players from using him at all.

"Devdan is glad all the fighting stopped. Devdan prefers the peace and quiet. War is not good for anything."

"The war over, Danved hung up his lance and became a traveling performer. His act could make anyone laugh."

Devdan is illustrated in the trading card game with the following cards: 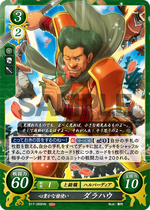 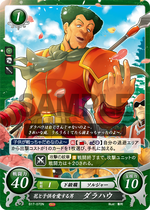 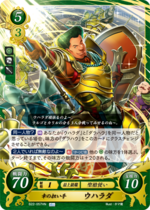 Devdan is a name from Sanskrit origin meaning "gift of the gods".