Dew is a playable character from Fire Emblem: Genealogy of the Holy War. He is the thief who assists in Edain's escape from the clutches of Prince Munnir of Verdane in Chapter 1. He was initially captured by Jamke for attempting to steal the treasures of the castle, but is later freed to escort Edain to safety. He will eventually perish in the Battle of Belhalla, alongside several of his fellow comrades.

Dew is a unique case in Genealogy of the Holy War. Before Promotion, he is restricted strictly to a support role due to some key weaknesses that prevent him from being an offensive threat. After Promotion, he can become a fairly powerful 1-on-1 fighter due to some unique strengths.

Before Dew promotes, there are several factors that prevent him from being useful in eliminating enemies. His base stats are terrible aside from Speed and Luck. He has low Movement along with not having a horse, making it hard to keep him near the front line. His weapon selection is extremely limited as he is only able to use C-level Swords. He cannot take advantage of his high Speed because he lacks Pursuit. Finally, his only starting weapon is an Iron Sword. All of this combined means that Dew will have difficulty fighting on the frontlines and keeping up in levels with your other units. One potential solution to gaining him levels is to engage in Boss Abuse, as Dew will have an easy time exploiting this tactic. Alternatively, if Dew has a lover, they can both continuously use the "Give" command, which will earn Dew 10 EXP each time. This is a slow but easy method to have Dew reach promotion.

Even without promoting, Dew does fill one unique role: he can steal Gold from enemy units, and he can use the Give command to give Gold to any unit in your army (where the Give command is normally restricted to lovers giving each other Gold). This also makes Dew a prime candidate to visit villages that give you Gold (villages boost Evasion, making it even harder for Axe-wielding Brigands to kill Dew), as he can redistribute it to anyone later on. So having Dew land an attack on enemy units before killing them can be beneficial. However, as Gold in Genealogy of the Holy War is abundant, this may not prove terribly useful in the long run. While any unit could replicate Dew's ability to steal Gold by buying the Thief Sword from Lachesis, it has low Accuracy and that unit would be unable to share their stolen Gold like Dew can.

After Dew promotes to Thief Fighter, he becomes significantly better at fighting. He gets access to A-level Swords, he gains the Pursuit skill, and gains a whopping +23 to his stats. He becomes one of your more resilient army members in that even though his HP is still quite low, he has very high Evasion due to his very high Speed and Luck, and his higher Skill will result in him activating Sol much more often, and with Pursuit he'll have twice as many chances to activate Sol, making him a competent fighting unit. However, even with these major boosts, he does not particularly outshine your more impressive units, and he will never fix his low Movement. So while he does improve vastly, he still does not measure up to the best.

Dew is difficult to pair. He has above average growth in every single physical stat other than HP, and those growths are split evenly across the board. He also offers two unique skills in Sol and Bargain. Dew comes with several problems that ruin his potential as a father, though: He lacks Pursuit, which makes half the pairings undesirable. He does not have any Holy Blood. He can only pass Sol onto 4 possible children (Larcei, Scáthach, Patty, or Lene). Meaning that for most pairings, he can only effectively offer Bargain as a skill. Bargain and above average growths are not good enough to beat out other male units that offer superior skills with similar stats.

Dew is best paired with Ayra. Brigid is a decent pick that has some merit while Silvia is interesting. The rest should be avoided due to a lack of Pursuit, Magic oriented units, or the children being unable to inherit Sol.

In Chapter 1, after Genoa Castle is captured, Dew may speak to Edain, resulting in her receiving the Warp and 50 love points with him.

In Chapter 2, if neither Dew nor Lachesis have a lover, Dew may speak to Lachesis, resulting in her receiving the Thief Sword and 50 love points with him.

In Chapter 3, Dew may wait in front of the entrance to the Bragi Tower. A conversation will ensue, in which he will receive the Wind Sword.

In Chapter 5, Dew may speak to Jamke after Lubeck Castle is captured, but nothing will result of it.

In Chapter 5, after Phinora Castle is captured, if Lachesis is in love with Dew, she may speak to him, but nothing will result of it.

“How unlucky... ...I've blundered once too much...”
—Dew's death quote in Genealogy of the Holy War

Dew's appearances in this story more or less match his canon ones in the game. Like in the original source, he's assigned by Jamke to guard Edain as she's released from Munnir's clutches, and afterwards he joins Sigurd's troops. He also is around when Briggid is recruited, and refers to her as "Big Sister". Unlike in the game, he survives the Battle of Belhalla, leaving the battlefield unharmed and ends up together with Briggid.

In the second part, a grown up Dew fathered Patty and Febail with Briggid and raised them after her disappearance, which he blames himself for. He and Patty struggle to save some children from the Child Hunts and meet a now adult Shannan, who comes to reclaim Balmung from the shrine it's stashed into. Patty and Shannan are forced to duel for Balmung, and once Shannan wins without harming Patty (as she tries to wield Balmung but is unable to due to her lack of Major Od blood), the three try to get themselves and the children into safety. However, the group is attacked and Dew is mortally wounded protecting his daughter. Before passing on he openly recognizes Shannan and then comforts a crying Patty, telling her that he's glad he could help her and that he's sure her mother is alive somewhere.

Dew is illustrated in the trading card game Fire Emblem Cipher with the following cards: 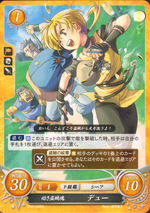 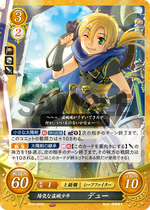