Ed Bednarzik(Radiant Dawn)
Drew Hobson (Heroes)
[view]
“Blood leads only to blood, and violence begets violence. Nothing more. Revenge is simply another name for murder.”
—Dheginsea in Path of Radiance

Dheginsea is the ruler of Goldoa and one the most trusted generals of Ashera, the final boss of Fire Emblem: Radiant Dawn. However he dislikes wars and tries to avoid conflicts, unlike his de facto son-in-law Ashnard who is the main villain of Path of Radiance.

Dheginsea is the King of Goldoa, home of the Dragon tribe Laguz and one of Ashera's Three Heroes who defeated the Dark God Yune. He is also known as the Black Dragon King. He had three children: Rajaion, Almedha and Kurthnaga, and two grandchildren: Soren, who is Almedha's son, and after his death, another grandson through Rajaion. He is referred to by the Hawk King Tibarn as a "living and stubborn fossil". He constantly urges the Laguz not to fan the flames of war while the location of Lehran's Medallion is unknown: his top priority is to save the world from destruction. It is to this end that he maintains a policy of perfect neutrality; he also twisted the truth and labelled Yune a "Dark God" to prevent Ashera from passing her judgement.

In Path of Radiance, he makes his only appearance around the middle of the game when he holds a meeting with the Laguz royalty: King Caineghis of Gallia, King Tibarn of Phoenicis, King Naesala of Kilvas, and Prince Reyson of Serenes Forest. Here, he tells the other Laguz to stay out of The Mad King's War, telling them to not risk awakening the dark god.

In Radiant Dawn, he first appears in Part III, when the Laguz Alliance is trying to flee from Begnion through the Kauku Caves back to Gallia. However, they instead end up in Goldoa and are taken to see Dheginsea. After Tibarn explains the situation, Dheginsea, though understanding their plight, does not allow them to pass from Goldoa to Gallia, and instead demands they return to the caves and find the way to Gallia through there. This act of stubbornness enrages many members of the Laguz Alliance, including Tibarn and Skrimir. Ike remarks bitterly about Dheginsea's demands, asking him why he does not just kill them right then and there, saying it will save them the trouble of walking to their deaths, which prompts Dheginsea to tell him that he does not understand, for not having lived long enough. However, Ena and Nasir appear and beg the King to give them passage because Reyson who, along with Leanne, restored Rajaion's sanity and allowed to have a peaceful death, was one of the members of the Laguz Alliance. Hearing this, Dheginsea grudgingly allows them to pass to Gallia through Goldoa, saying that it will be the only exception he will ever make.

Later on, after Ashera awakens from her slumber and casts her judgement on the world, when Yune's army finally reaches the Tower of Guidance, Yune tells them that when she went to Goldoa to gather allies to help her fight Ashera, she discovered that the country had been abandoned, meaning that the dragon laguz are probably inside the tower. After defeating the remaining Disciples of Order and General Zelgius, Yune's army confronts Dheginsea and the other dragon laguz. Here, Dheginsea tells the group, which include his son, Kurthnaga, and Ena, that they have broken their vow to Ashera by constantly warring and must now await their judgement. When Micaiah tells him that it was not war that woke Ashera up, but the Galdr of Release, he does not believe her. Afterwards, he transforms into his black dragon form and attacks the group. However, the group, whose weapons have been blessed by Yune, are able to defeat him.

Defeated, Dheginsea returns to his human form asks the group how they were able to defeat him. Yune, while speaking through Micaiah, tells him that she had given them her blessing. Realizing that he is talking to Yune, he apologizes for all he has done and admits that he changed history and named Yune a "dark god," despite knowing all along that she wasn't evil, but was merely too young to control her power. When Yune asks him why he sided with Ashera if he really knew what happened, Dheginsea says that he thought of it as punishment for all he has done, resulting in Yune calling him a "stubborn scalebag". Dheginsea then asks Yune to forgive him for all he has done, which she does. Knowing that he does not have long to live, he orders Gareth to gather their remaining soldiers and to follow Kurthnaga from on, appointing him as the new king of Goldoa. He then thanks Nasir for always serving him, despite having once left Goldoa out of disgust, and wishes Ena, who is pregnant with Rajaion's child, a life full of happiness. He then allows everyone to go on without him, since he cannot move. After everyone leaves the room, Dheginsea succumbs to his injuries and dies.

Dheginsea shares a personality similar to that of his grandson, Soren. He seems to be a little exaggerated with his words when confronted in the Tower; this may come from his pride at being the King of Goldoa. However, Dheginsea can back up his drama with his supreme prowess in battle.

In a memory scene that takes place before he dies, it is revealed that Dheginsea went to great lengths to prevent his own country from creating chaos. When Lehran, who was living in Goldoa after losing his powers as a laguz, asked him to help free the laguz who were slaves in Begnion, Dheginsea refuses, saying that their covenant with the goddess was to not have any wars. Lehran then asked him if he thought it would console the slaves if they knew that Dheginsea was indifferent to their situation, to which Dheginsea replied that all things required sacrifice. Dheginsea's stance forced Lehran to leave Goldoa and go to Begnion to find a solution without him.

In the second playthrough, if both Gareth and Nasir survived, they reveal a great deal about Dheginsea's actions from before and during the Mad King's War. They tell Ike and Micaiah that he had strictly forbidden other dragons to engage in any kind of contact and interaction with the outside world. Almedha opposed her father's policies and fled to Daein, where she fell in love with Ashnard, who was a prince at the time. Dheginsea worried about her and sent a unit of Red Dragons to retrieve her. However, they were captured and warped into Feral Ones. With the failure of the red dragons, Rajaion sacrificed himself for Almedha's freedom. The loss of two of his children, was a heavy blow to Dheginsea and he was deeply enraged, if Ike had not finished the war then the Dragon King would have burned Daein to the ground. Even so, he still did not waver in his neutrality, but was near doing so had Ike not won the Mad King's War when he did.

Harvest Goldoan
One of the Three Heroes who saved Tellius from chaos. Joined the harvest festival after hearing dragons are somehow involved. Appears in Fire Emblem: Radiant Dawn.

“Fools! By denying your judgement, you merely rush to your death.”
—Dheginsea's pre-battle quote

Dheginsea is illustrated in the trading card game Fire Emblem Cipher with the following cards: 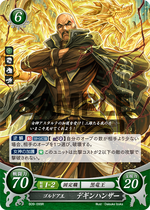 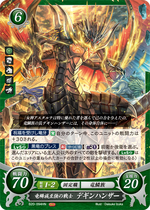