[view]
“Lester, if I were you I'd be a bit more concerned about your sister. Lana might be out here fighting for all you know.”
—Diarmuid in Fire Emblem: Genealogy of the Holy War

Diarmuid is a playable character from Fire Emblem: Genealogy of the Holy War and Fire Emblem: Thracia 776. He is the son of Lachesis and the older brother of Nanna, and is possibly the son of Beowolf and the half-brother of Fergus. In Thracia 776, Diarmuid's ability to wield the Beo Sword hints that his canonical father is Beowolf.

Diarmuid's substitute character is Tristan in Genealogy of the Holy War.

Diarmuid first appears in Chapter 6, where he, Oifey, and Lester emerge from the west of Tirnanog and rush to Seliph's aid when the hideout of the rebels is discovered by the surrounding subjugation forces.

After Seliph's army successfully fights through the enemy forces in the Aed Desert in Chapter 7, it manages to reach Leonster to provide aid to Leif, Finn, and Nanna, who are surrounded by hostile forces commanded by Bloom. It is at this point that Diamuid is reunited with Nanna. The conversation they share reveal that their mother Lachesis has gone missing while attempting to cross the Aed Desert to get to her son.

Diarmuid then goes on to continue aiding Seliph in prevailing over the Grannvale Empire.

Diarmuid first appears in Chapter 21, where he joins Leif's liberation army after Seliph succeeds in capturing Ulster from Bloom's forces. His first mission with Leif's army is to charge Fort Danzhi.

Diarmuid then goes on to continue supporting Leif in his cause to liberate Northern Thracia from the Grannvale Empire. He accompanies his cousin Ares to Agustria thereafter, where they work together to unite the country and bring it to prosperity.

Diarmuid's characterization is limited in both games he appears in, but from what little screen-time he is given, it can be discerned that he is a man with a strong sense of justice and honor, fighting for what he believes is right and just. He also cares about his sister, choosing to stay in Leif's army to support her.

In Chapter 7, Diarmuid may speak to Nanna, and Nanna will gain one point of Luck.

Coming with the Charm skill, Diarmuid will always be able to support your other units, but if his father does not pass down the Pursuit skill, he will not be an ideal fighter.

Beowolf and Azelle are considered to be the best fathers for Diarmuid, but he will do just fine as long as he inherits the Pursuit skill. Despite the fact that Azelle is of the Mage class, Diarmuid's Strength will not suffer any repercussions, as this is thankfully offset by Lachesis' Minor Hoðr Holy Blood. Additionally, Azelle's Minor Fjalar Holy Blood will enable Diarmuid to be a formidable unit with any Magic Sword he wields.

Alec is mostly a downgrade of Beowolf, passing on similar growths, Nihil instead of Charge, and only B Swords instead of the A Swords Beowolf can pass. Finn and Midir can also pass down well-rounded growths and Pursuit, but no weapons.

Non-Pursuit fathers like Lex, Naoise, and Dew can be good fathers, but the Pursuit Ring is recommended to make up for the lack.

As a unit, Diarmuid has a lot that makes him stand out: even with a father with the weakest Strength growth, he will still boast 50% growth, on top of a good base and access to A-rank swords from the jump. He is mounted, which is important in the game's sprawling maps. His Charm skill is always useful on both offense and defense. He has more Resistance than most non-mage units. All this makes Diarmuid a very useful and well-rounded unit. He lacks a few things that keep him from being among your top-tier units. He lacks a Holy Weapon. Although he has great Skill, especially after Promotion, Skill is of marginal use in Genealogy of the Holy War unless you have an ability that keys off it (e.g. Astra, Luna, Critical). On the other hand, his great Skill and high cap means that after Seliph receives Tyrfing, Diarmuid makes a great candidate to receive Sigurd's Silver Sword, which undoubtedly has obtained over 50 kills by then, pairing wonderfully with Diarmuid's high skill to get consistent Criticals, turning into perhaps your best unit without a Holy Weapon (although Fee with the Brave Lance could probably give him a run for his money).

Think of Diarmuid as a weaker, more support-oriented version of Fergus. He has higher Movement and stats almost comparable to Fergus at similar levels. Regardless, Diarmuid still makes for a useful unit, with slightly above average stats for his level. He will end up being an above-average fighter, and when coupled with the Beo Sword, will be capable of taking out quite a number of enemies on his own. Furthermore, he will be able to provide noticeable bonuses to other units within two spaces, further enhancing his usefulness as a unit on the battlefield.

Diarmuid - Charming Knight (カリスマの騎士 Karisuma no kishi)
"After the war's end, Diarmuid departed for Agustria with his cousin, Prince Ares. Their combined efforts led to an era of unprecedented growth for their motherland."

Diarmuid is illustrated in the trading card game with the following cards: 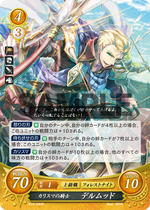 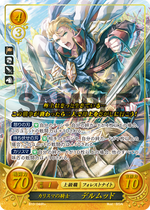 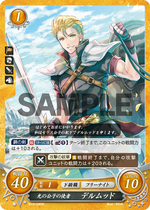 Diarmuid was a warrior of Fianna in Irish mythology.