Yada Koji
[view]
“Life's a gamble: it's always sink or swim... Betting on the unknown is more interesting than a sure win.”
—Dice talking to his daughter in Archanea Saga

Dice is a playable character in Fire Emblem: Archanea Saga and Fire Emblem: New Mystery of the Emblem. He is the father of Malice who ends up joining Rickard in taking treasures from the Archanean palace. He is a Fighter who resembles a Viking.

In Fire Emblem: New Mystery of the Emblem, he joins at the end of Chapter 10 in the main story, along with Malice. He also appears in Archanea Saga Episode 3: Thieves' Gang of Justice, where he is a recruitable enemy, and in the third downloadable episode, where again he is recruitable alongside Malice, this time after a conversation with her.

Dice generally will cap his HP and Strength, along with average Skill, Luck, and Speed to boot. The only setback are his defenses: with a growth rate of 15%, Dice is likely to get low Defense, making him de facto a glass cannon. Regardless, he is still useful unit to have if Barst, Bord, or Cord were not properly trained or died. Should one seek to reclass Dice, Pirate/Berserker is recommended.

If the reclass sets have been merged, Dice's strangely high Resistance growth can be beneficial as a Dracoknight.

"After the war, Dice received an outrageous reward from Prince Marth. He soon spent all of it gambling, however." 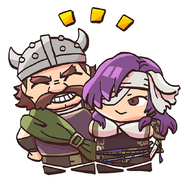