Christopher Bevins
[view]
“A mercenary has to fend for himself. No one's gonna be looking out for you. You've got to be skeptical. You should even be wary that I might be giving out orders just so I can ensure my own safety.”
—Dieck talking to Shanna in a support conversation.

Dieck (Deke in Super Smash Bros. Brawl) is a playable character in Fire Emblem: The Binding Blade. He is the leader of a small mercenary company and is very loyal to his employers.

Originally an Etrurian gladiator, Dieck attracted the attention of the nobles, Pent and Louise, who offered him a job as Klein's guardian. Dieck had saved Klein when he was a boy from a charging lion, whose claws dug into his body, leaving deep scars. Pent and Louise did not mind that he fought alongside the gladiators in arenas and charged Dieck with the protection of their son. Dieck left their service some time later when nobles pressured House Reglay with the fact that Dieck should not be involved with nobility, being of common blood. Klein, however, never forgot his former playmate and protector.

Sometime after, Dieck and his group of mercenaries had been recruited by a certain lord to fight against his enemies. That lord, in an effort to buy time to escape, abandoned the mercenaries. Many were slaughtered, leaving Dieck the only survivor, and his foes captured and tortured him. He later hires two young axefighters named Wade and Lot, as well as an Ilian Pegasus knight named Shanna.

Being hired by Eliwood to serve Roy's army, he joins his group in accordance to his contract to House Pherae.

Dieck continued in the mercenary business after the war settled, though he broke up his mercenary band and set out to travel on his own, and wondered if he would ever meet an employer like Roy again.

Gruff, serious, and powerful, Dieck is shown through multiple support conversations that he is extremely cautious and cares for other members of the army as much as his own life, often making efforts to advise and protect them. With his former employer Klein, Dieck tries to distance himself from the Reglay family in order to save their reputation. Even when Klein personally approaches Dieck when he is 19 years old, he tries to distance himself from the Reglays.

Dieck is also a mentor for his mercenary band and even a confidant for Rutger. He talks to Wade about how he can improve his axe work, he warns Shanna about going too far behind enemy lines, and he tries to help Rutger with dealing with what Bern did to his family. Dieck has shown to care deeply to those he meets and tries to help them with their issues.

Description: A former arena fighter from Etruria. Leads a band of mercenaries.

Dieck is one of your best fighters early on thanks to his high bases. He helps makes the early game more manageable, and is a fairly dependable unit at that point. While he faces competition from Rutger with the chapter 7 Hero crest, the chapter 10B/11A Hero crest has better odds for him. In all, Dieck is one of the more solid foot units in the game, joining early on with great base stats and having great promotion bonuses on top of gaining hand axes which he can put to better use due to his high skill base and decent (albeit not fantastic) growths.

Wounded Tiger
Head of the mercenary groups employed by Pherae, having once been a gladiator himself. Appears in Fire Emblem: The Binding Blade.

Dieck - Wounded Tiger (手負いの虎 Teoi no tora)
"Dieck broke up his mercenary band and set out to travel on his own. After that, he continued to participate in various battles. Once, an entire legion of enemies fled after seeing him appear on the battlefield... That is but one of the many legends he has left behind."

“I'm sorry... I can't stay with you.”
—Dieck's death quote in The Binding Blade.

He makes a brief cameo appearance in chapters 16 and 17 of the Hasha no Tsurugi manga.

Dieck is illustrated in the trading card game Fire Emblem Cipher with the following cards: 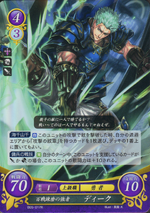 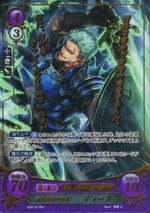 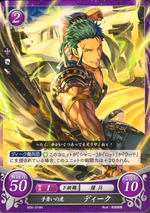 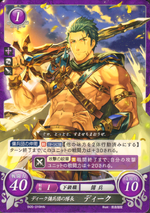 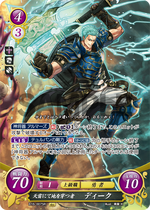 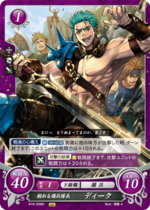