Prf (Olwen and Reinhardt only)

The Dire Thunder (ダイムサンダー Daimu sandā, fan translated as Dime Thunder or Daim Thunder) is a Thunder magic tome from Fire Emblem: Thracia 776. This tome can only be used by Olwen and her brother Reinhardt. When cast, dual bolts of lightning will be summoned from the heavens, striking a selected enemy unit in consecutive succession.

Up to three copies of the Dire Thunder tome may be obtainable in any one given play-through of Thracia 776: One may be stolen from Olwen in Chapter 10, another from Fred in Chapter 11x, and yet another from stealing Reinhardt's copy in Chapter 22.

* Olwen and Reinhardt only. 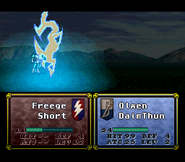 In-game model of the Dire Thunder tome from Heroes.