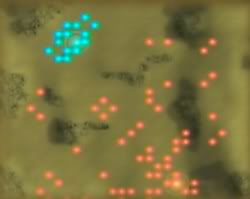 Stefan (Move Lethe, Mordecai (need PoR support) or Micaiah onto the spot 1 left and 11 up from the most bottom-right tile)

The journey to the Tower of Guidance becomes more difficult, as Ashera's Disciples of Order hound the travelers' every step. Micaiah's ability to sense danger proves invaluable, as it gives her allies advance warning of attacks by the Disciples. Thus prepared for each battle, the group keeps casualties to a minimum. As they travel south through Begnion, Micaiah and her company clash repeatedly with the Disciples of Order. Eventually, they pass through the central mountans and into the lonely wastelands of the Grann Desert. They are sustained only by their faith that they will reunite with their companions at the Tower of Guidance.

Distortions is the third chapter of Part 4 in the game Fire Emblem: Radiant Dawn. The player takes charge of Micaiah's team in this chapter, with the Black Knight making an appearance as an NPC unit. Appearing at the beginning of turn 5, he will assist Micaiah in clearing out the enemies, but he will not engage Numida in a fight, and neither will Numida engage him in a fight. Lekain makes an appearance as an enemy unit with a locked Rewarp. Lekain will individually retreat after the battle has progressed to a certain point or if he is defeated.

Distortions is made up of a desert map, which hampers the movement of all units except magic and flying ones. There are various items hidden in specific spots on the map as well.

The below-listed coordinates begin from the bottom-left hand corner of the map (Use Sothe to find them).