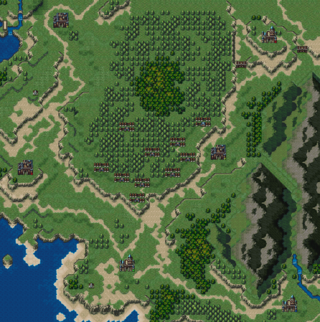 Chapter script
[view]
“Upon gaining control of the Verdane Kingdom, Sigurd received orders from Belhalla to preside over Evans Castle along the border. He soon thereafter took Deirdre to be his wife. Grannvale's subjugation of Verdane caused quite a stir in neighboring Agustria. The lords of Agustria expressed strong anti-Grannvale sentiment. The great King Imuka, who prized peace more than anything, was killed by an assassin. King Imuka was succeeded by his eldest son, Prince Chagall. Grannvale's military was still far away to the east in Isaach. And none too soon did the new king command the lords of Agustria to invade Verdane. Under orders to hold Evans Castle, Sigurd once again found himself in the midst of conflict.”
—Opening Narration

Disturbance in Agustria is Chapter 2 of Fire Emblem: Genealogy of the Holy War.

This chapter has you being attacked on multiple fronts multiple times and correct positioning is essential to completing this chapter with no casualties.

At the beginning of the chapter, Nordion will be under attack from Elliot, who has a Silver Lance. You are going to want to rush in with your cavalry units; notably Lex, Quan, Finn, and Sigurd, so you can save Lachesis and her knights. Bring Ethlyn to heal the knights so you can get the Knight Ring later. You will likely want to kill Elliot with either Quan or Finn to make use of the Silver Lance. From there if you want the Bargain Ring you'll have to rush to Heirhein and seize it quickly. Then Lewyn will appear from the top right village with Silvia and use them to clear out the bandits and get the Bargain Ring. However, doing so is very difficult without losing any of your units because you have to be precise with every move, not to mention that those sidequests tend to rely on RNG.

From there Voltz will appear with Beowolf at the very top of the map. Once you start approaching Anphony they will rush at you at full force. Using Quan and Finn, you can easily take out multitude of Sword Knights. You will need 10,000 gold to recruit Beowolf, but this should be easily gained through the arena or selling the rings given by the bosses. Voltz himself will be a bit of a challenge, but he will fall easily if you attack him with both Finn and Quan. From there using Ayra, Chulainn (if you recruited him), and Lewyn to clear out the armors and assault Macbeth. After you defeat Macbeth, you will want to move everybody back down to Nordion and a small group with Lewyn to your Home Base to prepare for Erinys' attack.

To take Mackily you will have to go through two of Chagall's Cavalry brigades and the Myrmidons, Archers, and Fire Mages protecting the castle. You might want to send in Azelle and Quan to deal with the 2 range units and the Myrmidons. But the Archers and Myrmidons have pursuit, so be careful about that. Use Deirdre's Silence to remove the threat of the Sleep Staff from the field then just kill him with anybody you wish. During all of this, Erinys' Pegasus Squad will be moving towards your base, and if you let them take it, it's game over. Since you need to use Lewyn to recruit her, it is best to give him an escort as well. Since the Pegasi have javelins, using Finn, Quan, or Lex would be a good idea. After defeating all of them, use Lewyn to talk to Erinys and recruit her.

After this, Zyne will come out with his brigade of horse units. His Horseslayer is guaranteed to land critical hits against your cavalry units, therefore, player should be cautious when battling him. The weapon will drop after defeating Zyne and will be a great asset in the next chapter, so make sure lance units such as Finn or Quan receive it. Using units with 1-2 range such as Quan, Azelle, Lewyn, and Lex would benefit you greatly in the attack on Agusti. Watch out for the five ballistas though: only one of them can be destroyed at range, and only Erinys can reach the others, but as she is a Pegasus Knight, she will be easily killed if she doesn't dodge one of the hits. After dealing with Zyne's brigade, use your most powerful units and take on Chagall and his Armors. You will likely want to use Azelle and Lewyn for this job. After that, the chapter is over.