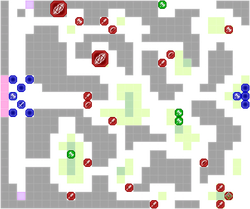 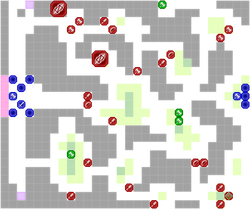 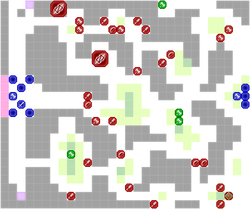 Byleth, Hilda, Cyril and 8 others

Chapter script
[view]
“Almyran forces are attacking Fodlan's Locket. With her brother suddenly fallen ill, it is up to Hilda to take over the defense. Cyril volunteers to accompany her.”
—Opening Narration

Dividing the World is Hilda and Cyril's Paralogue Chapter in Fire Emblem: Three Houses. This chapter takes place at Fódlan's Throat, and is available on all routes except Crimson Flower.

The allied units, the Goneril Soldiers, are surrounded by enemies, as they were the last stand against the Almyran invasion forces until Byleth's party arrives. All allied Armoured Knights are in immediate peril. In the northern half the battle, enemy units will seek to annihilate the remaining allied Armoured Knights. Most of them will prioritize moving towards and attacking the Armoured Knights even if player units are in range -- unless their paths are blocked. The enemy general and his retainers will only move at the 4th turn. In the southern half of the battle, the enemies in the center and in the west will seek to get to the keep's defense line.

Saving all of the soldiers, particularly on Maddening difficulty, is often extremely difficult if not impossible depending on the resources at the player's disposal, so note that the only reward difference between saving some and saving all is a Hexlock Shield.

In Maddening, allied Armoured Knights are set to aggressively attack enemy units. This means two things: after exhausting their Gambit charges, they will use normal attack and thus receive highly accurate and damaging counter-attacks; they will seek to maximize the use of their own movement points -- appearing to cut off enemy units from flank or back in the map whenever possible. These combined further make the most obnoxious "feature" of this paralogue: one of the Armoured Knights in a pair is likely to fall under the range of the Sniper by attacking one of the offending Archers from a flanking angle. After receiving 2 shots from the Sniper in one round of combat, the Armoured Knight will fall to an additional Archer within the same turn even if he starts from or has been healed to full HP. The allied Armoured Knights will stop moving after the two Wvyern Riders starting in the northwest are killed.

Since player units are needed to be inserted in front of enemy units in order to block their movements, a few units who can dodge most attacks and/or only receive minor damage from enemy attacks are probably required. A group of enemies with Battalions will attack from southwest towards the keep. In addition to avoid and defense, one unit with high charm is also probably required.

The single Armoured Knight on the east side of the map will eventually have received the attacks of 4 enemy Cavaliers within 4 turns. Two friendly units are thus probably required to save him.

The paired Armoured Knights may be the most difficult to save. The bridge area to their west can be blocked with one player unit. Due to Poison Strike on enemy Archers, the Armoured Knights require healing even if they are only attacked by two enemy Archers. As mentioned above, one of the Armoured Knights may venture to within the range of enemy Sniper -- dooming himself in the process unless either the Archers or the Sniper is disposed ahead of time. It's advisable that the player try out the sequence to save this pair before engaging in the rest of the battle. The wandering Armoured Knight problem can be solved by, for example, killing the two Wyvern Riders in turn 1, which limits the movement of the Armoured Knights via a story script (although they will still move to attack); or having an extra player unit to use a positional Combat Art or Rescue on him when he veers off. The nuance lies in how to distribute player forces over the different needs: killing Wyvern Riders, blockade at the bridge, healing injured Armoured Knight, dealing with the wandering Armoured Knight, etc.

If 6 or even 7 units are dedicated to saving the allied Armoured Knights, one can see how the defense of the keep is made challenging. That is why extra range on magic users are helpful -- since 5 or 6 units (minus whoever are magic users) will struggle to cordon off a safe area close to enemy units. The two Giant Birds are not threatening by their damage. However, if they can attack while touching the defense line (the tiles with pink overlay), they will, thus defeating the player. Their AoE attack will make player units unable to move even if it misses. Their Barrier shield only has one charge -- ie. it will remain in the shattered state even after replenishment. Their normal attack has up to 2 range. Thus, without careful positioning, one of their barrier tiles can become inaccessible. In addition to careful positioning, early intercept of the Giant Birds by ending a unit's turn within a bird's range before the main swarm of enemies arrive is probably required to obtain their Shield Break drops. Efficient shield break is why AoE offensive Gambits can be essential in this paralogue. Gambits can of course also be used on the swarm of enemies arriving from the west. The Encloser Combat Art can be the last resort if a Giant Bird is in range to reach the defense line.