“You ruled Razelia with such an iron fist since the Empire assigned you there that the citizens began an organized rebellion! Your mother scolded you for it, and you killed her! You're nothing if not a monster.”
—Dolmu, in a conversation with Rentzen

Dolmu (ドルム Dorumu, fan translated as Dholm) is an enemy character from TearRing Saga: Utna Heroes Saga. He is the duke of Zemseria and one of the most powerful nobles in Reeve. He is also the father of Rentzenheimer.

During the fall of Reeve, Dolmu was encouraged by Rentzenheimer to betray Reeve and ally with the Zoa Empire. As a result, he was rewarded with control of Razelia by the Empire. As Runan's army approaches the Reeve River, Dolmu notices the withdrawal of Canaan's forces by Prince Julius, who is aware of his treacherous nature.

“They've breached our defenses already... And I can't surrender now... Very well. If death is my only option, then you're all coming with me!”
—Dolmu's battle quote 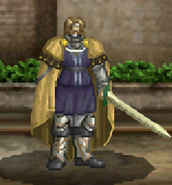