Knight (Shadow Dragon and the Blade of Light)

In Tokyo Mirage Sessions ♯FE, he is voiced by Yoshinori Sonobe.

In Fire Emblem: Archanea Saga, Dolph is one of Midia's knights helping Boah, and Nyna in an escape attempt out of the Palace which was under siege by Doluna. Dolph, and the rest of Midia's knights are captured by General Camus. As such, Dolph would remain in the Palace's prison.

As the Archanean League enters the palace, Doluna attempts to execute their prisoners, though due to Dolph acting as a shield, they are rescued in time. In his ending he leaves the army as a rejection of Hardin taking the Archanean throne. His starting class is a Knight.

Dolph is one of the characters removed in original Mystery of the Emblem book 2, however he is added in the remake. Dolph joins automatically at the start of Chapter 15, hoping to restore honor to Archanea.

The remake reveals Dolph is something of a glutton, and enjoys eating. Dolph has a self-sacrificing personality, and believes as a knight it is his duty to act as a living shield for his comrades. It is revealed he and Macellan used their bodies to shield the arrows of the executioners from hitting his fellow knights during the War of Shadows.

Dolph appears in Chapter 6 during the first trial to acquire the Opera of Light: Fire Emblem as one of four boss Mirages. He fights alongside Macellan, Gordin, and Linde.

Unlike Macellan, who he bears a resemblance to, Dolph is often thought of one of the better armor knights in the game, although he is overshadowed by a reclassed Sedgar. If he is class swapped, Horseman is recommended.

Spitting Image
Dolph had a short career as a general before leaving the army. Some said the move was a tacit rejection of the king-to-be.

Spitting Image
"Dolph politely declined requests to return to the Archanean army. He continued to help with the reconstruction on the Archanean border."

Dolph's Japanese name derives from "Tom", which originates from the Aramaic language designation תום tōm "twin". This is befitting of his resemblance to Macellan.

Dolph is a diminutive of Adolph/Adolf, which came from a German name meaning "noble wolf". Its frequent attribution to Adolf Hitler, the Nazi leader mostly responsible for World War II, has greatly decreased the usage of the name. [1]

Dolph, as he appears in the fifth series of the TCG as a Level 10 Knight.

Dolph, as he appears in the sixth series of the TCG as a Level 20 General.

Dolph's portrait in Shadow Dragon and the Blade of Light. He shares the same portrait with Macellan.

Dolph's portrait in Mystery of the Emblem.

Dolph's portrait in Shadow Dragon and New Mystery of the Emblem. 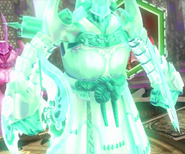