Cantor
[view]
“Even if you leave this place alive, the Faithful will hunt you down. How long will you place the lives of your friends at risk, Your Highness? You're more clever than that.”
—Dolth

Dolth is an enemy boss character in Fire Emblem Gaiden. He is a member of the Duma Faithful under Jedah who can summon the dreaded necrodragons.

After Jedah expunged the sage Halcyon and the latter took refuge in the Sage's Hamlet, Dolth was tasked with manning a fort that stood guard at the entrance to these woods. With their corruptive powers contaminating the very earth they stood upon, both Dolth and Garcia saw the Lost Treescape slowly turn to a poisonous swamp simply due to their presence.

Dolth appears as the third boss faced in Celica's route during Chapter 4. When Celica's party reaches his keep he attempts to persuade the princess to lay down arms and allow him to escort her. Though she struggles answering, Mae threatens the Cantor, resulting in the man siccing his necrodragons on the party among his small force of Dread Fighters, Snipers, and Arcanists.

Although he is defeated, he survives the battle. Resuming the conversation from earlier, the cantor continues his attempt to convince Celica to offer her soul up to Duma in exchange for the safety of Zofia and others, asking to allow him to escort her to Duma Tower. He goes so far as to assault Mae at her and Saber's urging Celica to escape. This forces Celica to agree to his demands, but as she is about to depart with him, the Masked Knight appears in the nick of time and finishes him off.

Being a minor boss, his personality is not quite expansive by any measure. Much like others in the Rigelian army and the Duma Faithful, he is a wicked person who will harm/kill those who slight him or his faction. Aside of this, he does display a relative willingness to escort Celica to be offered up to Duma with no clear desire to attack her or her comrades, and he attempts to reason with the princess to peacefully surrender even after he is at the party's mercy. Once the princess is in his grasp he promptly leaves her comrades alone with no further attacks on them. This contrasts with many of the others in the Duma Faithful who have attacked Celica and her party at first sight, though Jedah's similar attempts earlier may have had an influence in Dolth making these decisions.

“... Gwehehe... Oh, we desecrated creatures who rule this swamp of the dead, repel these men according to the orders of Master Jedah! May you fall victim to the necrodragons that I, the Great Shaman Dolth, summor forth from the dark realm!!”
—Dolth's battle quote in Gaiden
“Such stubborn children... It appears that the lesson in pain is in order.”
—Dolth's battle quote in Echoes
“May the blessing of Duma–”
—Dolth's death quote in Gaiden
“Impossible...”
—Dolth's defeat quote in Echoes

Concept artwork of Dolth from Echoes: Shadows of Valentia. 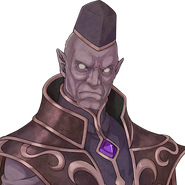 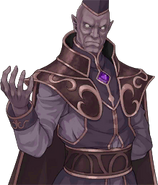