Sam Riegel
[view]
“Fight and get stronger, he says... Guess it can't hurt to try. I sure hope I don't get in the way! Gosh, that would be just awful...”
—-Donnel

Donnel, given the full name Donnel Tinhead in the localization, is a playable character in Fire Emblem Awakening.

Donnel is a villager from Ylisse, and is a common young man who likes plowing fields. Due to the fact that before his recruitment into the Shepherds, Donnel had never left his village, he is interested in many things. Donnel appears as a kid in makeshift armor wielding a Lance on foot. He lives with his mother before leaving to join Chrom's army. His father was killed by Roddick trying to protect his wife and Donnel. Upon meeting Chrom he introduces himself as Donny before quickly correcting himself with his real name. Nevertheless, some members of Chrom's army refer to him as Donny, such as Lissa and Chrom themselves. Donnel is a bit younger than Lissa. Donnel wears a pot over his head in order to hide his messy hair.

One day, Donnel's village is attacked by bandits, but he is able to escape. Donnel encounters Chrom and asks him to save the kidnapped villagers. He leads them to the bandit's hideout and Chrom asks him to fight with them. Though he tells Chrom he's just a regular villager, after some encouraging words from Chrom, he musters enough courage to fight with them. After defeating the bandits and Donnel gets a bit stronger, he joins Chrom's army. Alternatively, if Donnel does not get stronger after defeating the bandits, he will remain in his village and cannot be recruited.

In the epilogue, Donnel returns back home to his village and lives a quiet life with his mother and his wife if he has one. He never returned to battle after this.

Donnel is a typical village boy "from the sticks" and is unaccustomed to life outside of his village. Though he was hesitant to ever enter battle, Donnel musters enough courage to stand up for himself and eventually join Chrom's army. His speech is vastly different compared to the rest of the army, speaking with a southern-farmer accent, saying phrases such as "git 'r done!".

In his support with Nowi, it is revealed Donnel's father was an avid rock collector until he was killed, making him carry his father's favourite stone ever since, with his supports with Lissa, revealing that his dream is to travel the world looking for the secrets to his father's stone.

Donnel is well versed in survival and practical skills including animal trapping, fishing, and cooking, as shown in his supports with Panne and both Robins, with his supports with Kellam even saying he grows food for the army as well. Many people in the army note of his incredible aptitude in learning due to his eagerness to improve himself and find his true potential, with perhaps the most extreme example being when he completely memorizes a legal tome, lent to him by Maribelle, which even she herself hasn't fully done so yet.

Donnel has two Male-only classes: Villager and Fighter. If he marries someone who produces a daughter, then his daughter will inherit the following classes instead.

Donnel is horrible when you first get him. But if you stick with him you can end up with an extremely powerful unit for a good chunk of the game. The best way one could describe him as a unit is this you could put the growth of everyone else on a graph and while for about the first 8 maps on the game he may seem useless. However if you stick with Donnel towards midgame you got a very powerful unit only rivaled by Second Generation units for the most part. However, one issue to Donnel though his personal caps are lower than most of the cast however by that point game's mostly done with but this is an issue on the harder difficulties. Ultimately the choice of if Donnel's worth using or not is up to the player if they want to put the effort into making an extremely powerful unit or would rather not deal with a liability that may seem rather weak compared to the Second Generation.

Donnel's reclassing options are Mercenary and Fighter, both of which are a step above his Villager days. It is also worth mentioning that Donnel will be reverted back to E rank in whatever class he reclasses into, forcing you to use Bronze Weapons or expend Arms Scrolls on him to allow him access to stronger weaponry.

After grabbing Underdog, it is highly recommended to go straight to Mercenary, since his immediate acquisition of Armsthrift combined with his high Luck makes him extremely good at extending the lifespan of rarer weapons. The class also balances out Donnel's stats with good speed, skill, and strength and good defense. In addition to the stat compliments, the Mercenary class will offer Donnel the Patience skill, which will increase his Hit and Avoid during the enemy turn. His Hero promotion from this class yields Sol, allowing him to heal himself during battle, and with his fairly high Skill, Sol should activate often. Hero is Donnel's most well-balanced class in terms of stats, abilities, and weapons and is recommended as his end class. Reclassing into Bow Knight will offer Donnel access to Bowbreaker, a useful skill to complement Counter from the Warrior class, which will not activate against ranged attacks from weapons such as bows.

Fighter boosts Donnel's offensive capabilities as much as possible while slightly dropping his defenses. This class emphasizes axes letting him wield Hand Axes for range until he promotes into either Hero or Warrior. Zeal and HP +5 are good skills for Donnel to use even outside of this class. However, over time, these skills may begin to lose relevance as Donnel begins to reclass multiple times, leading to them being swapped for more versatile skills such as Sol. Warrior adds higher Strength caps, Bows, and Counter to his repertoire, the latter of which is especially useful in conjunction with Sol from the Hero class. Unfortunately, due to the overlap of Mercenary and Fighter both promoting to Hero, Donnel has access to only three upgraded classes total. This gives him a rather limited, but useful, skill pool.

Overall, Donnel has to be reclassed to be a unit worth using, as Villager is useless in the long run. Despite his somewhat shallow range of abilities, Donnel can still be a very capable unit with skill combos like Sol and Counter, with Bowbreaker alleviating the combo's range weakness to an extent and Patience further extending his survival during the enemy turn. Armsthrift will allow Donnel to wield expensive and forged weaponry for longer periods of time, making him a prime candidate for holding fabled weapons like Helswath. Ultimately, Donnel's biggest strengths lie in his fast growths and Luck stat. His growths and the benefits of Aptitude allow him to cap out faster than nearly all other units, making him a very strong mid- to-lategame unit with some early-game investment and decent training.

Donnel can be a great father due to his unique classing situation. Donnel's Aptitude skill is great to pass down to aid in stat building, though it becomes a useless ability once they are capped. Underdog is also worth passing down, since children characters are recruited in a lower tier and at a lower level than other units. Both of these skills are especially good to pass down to his daughters since they are unable to become Villagers themselves. If not, Counter works well as another pass down to his daughters. Because of Donnel's male-exclusive classes, he will pass down different classes to any daughters he may have. Daughters will gain the ability to turn into Pegasus Knights, making Donnel an excellent father for Noire, Nah, and Kjelle, as he gives them access to Galeforce. The addition of the Troubadour class can allow his potential daughters to gain more supportive skills from Valkyrie or gain Renewal from War Cleric.

Village Hero
A farm boy from a country village in the Halidom of Ylisse. Handy and hardy. Appears in Fire Emblem Awakening.

Donnel - Village Hero (村人 Murabito lit. Villager)
Donnel returned to his tiny village and lived a quiet life with his mother. He never took up arms again—a blessing for which he thanked the exalt daily.

Donnel and Robin
Many wrote of Robin's legendary exploits, but accounts of her origins and character varied. Scholars, poets, and bards agreed on one thing alone--she loved her husband, Donnel, above all else.

Donnel and Cherche
Donnel returned to his tiny village and built a happy life with his mother and his wife, Cherche. The latter's easy laugh and many skills quickly earned the love and respect of her new family.

Donnel and Cordelia
Donnel returned to his tiny village and built a happy life with his mother and his wife, Cordelia. The latter, however, continued to train hard as a knight and often answered the exalt's call.

Donnel and Lissa
Donnel returned to his tiny village and built a happy life with his mother and Lissa. Still, the latter insisted on breaking the monotony, and the couple often traveled to far-flung markets.

Donnel and Maribelle
Donnel returned to his tiny village and built a happy life with his mother and Maribelle. Still, he was careful not to pester his new bride about working in the fields, lest she lift a scythe for other reasons.

Donnel and Miriel
Donnel returned to his tiny village and built a happy life with his mother and his wife, Miriel. The latter directed her studies on the local flora; Donny was shocked that trees could have ten-syllable names.

Donnel and Nowi
Donnel returned to his tiny village and built a happy life with his mother and his wife, Nowi. She loved her new home and scampered through the fields and mountains with the fervor of a village cat.

Donnel and Olivia
Donnel returned to his tiny village and built a happy life with his mother and his wife, Olivia. Their forgotten hamlet glowed during festivals, when Olivia's dancing warmed more than any fire.

Donnel and Panne
Donnel returned to his tiny village and built a happy life with his mother and his wife, Panne. This new "warren" had more than enough nature to please any taguel, and her heart found a home at last.

Donnel and Sully
Donnel returned to his tiny village and built a happy life with his mother and his wife, Sully. The latter established a militia much like the Shepherds to arm the villagers against the threat of brigands.

Donnel and Tharja
Donnel returned to his tiny village and built a happy life with his mother and his wife, Tharja. The latter never warmed to the villagers, but she was said to smile around her family.

Donnel is illustrated in the trading card game Fire Emblem Cipher with the following cards: 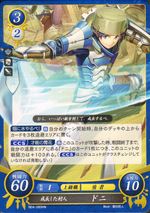 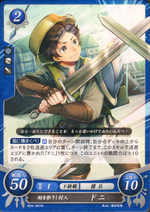 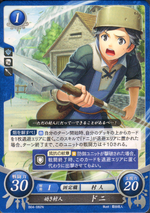