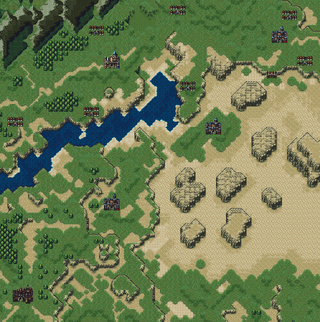 Chapter script
[view]
“The Silessian civil war is over, and the Grannvale army awaits Sigurd. Zaxon Castle has barely fallen, yet before Sigurd can so much as rest, the hordes of Grannvale stand before him at the captured Lubeck Castle. The Grannvale commander, Duke Lombard, is a longtime enemy of Sigurd's father. For Sigurd, to challenge Lombard is an opportunity to avenge his father, Byron, framed by Lombard for his crimes. Beyond Lubeck, in the desert town Phinora, Lord Arvis's elite warriors stand guard under the command of the war-mage Vaja. Velthomer Castle, on Grannvale's border with the Aed Desert, is defended by Lord Arvis' trusted aide, General Aida. And in Belhalla, the royal capital of Grannvale, Lord Arvis serves to aid the bedridden King Azmur, while Chancellor Reptor of Friege maintains peace and order in the city. A long road to Belhalla awaits Sigurd... A clash with Grannvale en route is inevitable. Sigurd refuses to endanger the people of Silesse any further in this conflict. He is determined to fight to the end. The year is Grann 760, early spring. The fields of Silesse peacefully rest beneath a deep blanket of snow...”
—Opening Narration

Doorway to Destiny is Chapter 5 of Fire Emblem: Genealogy of the Holy War. This is the last chapter where players get to use Sigurd as it is the turning point of the game.

This chapter is your last chance to prep the second generation. Ensure that all your planned marriages occur before ending the chapter. Since the chapter does not end when you cap the last castle, but when Sigurd talks to Aida (a green unit), you can do inventory management for the entire army via the pawn shop in the last castle. Set up your characters' inventories to match your inheritance strategy. It is extremely useful for Sigurd to possess the Elite Ring when the mission ends: this greatly increases Seliph's leveling speed in the second generation. Likewise, getting key weapons (Sigurd's Silver Sword, Midir's/Jamke's Brave Bow, Ayra's Brave Sword, etc.) to 50 kills so they unlock the Critical ability before being inherited is very useful if you can manage it.

At the start of the chapter, the wounded Byron will begin making his way toward you, carrying the broken Tyrfing with him. However, there is a wall of enemies in his way. You should begin the chapter by sending a few units to rescue the surrounding villages (the gold will be useful for final inventory preparations) and have the rest of your units charge the wall of enemies and take them out as fast as possible. Speed is important here, as the enemy units will easily kill Byron if they are not taken out. One strategy for this is to use Silvia to help Lewyn reach the enemies, as he can take them all out quickly and safely thanks to the massive speed boost Forseti grants him. Once the wall is dealt with, have Sigurd talk to Byron and claim the broken Tyrfing, then mop up Byron's pursuers. Invest some gold in repairing the Tyrfing, as it will massively increase Sigurd's power.

Next, you must deal with another wave of enemies approaching from the west. They are similar to the foes that made up the wall you just broke up, and shouldn't be too hard to deal with. However, the swarm of brave bow wielding knights that will be your next opponents could be tricky. They are weak individually, but get a noticeable boost when close to their leader. Kill the leader first if possible, and then have your units rip his subordinates to pieces. Using a few high-speed units as dodgetanks could help if you find yourself struggling with this group of enemies, as the bow knights are fairly inaccurate without their leader around. Once the bow knights are taken care of, advance on Lubeck, pick off Lombard's few remaining guards, and begin the fight against him. He is tough thanks to his high HP and the deadly axe regalia Helswath , but will fall quickly to Lewyn's Forseti and Sigurd's Tyrfing.

Now that Lubeck is yours, Quan and Ethlyn will appear on the southern edge of the desert with half of Leonster's Lance Ritter brigade in tow. Unfortunately, they are pursued by an army of Thracian Dragon Knights, almost all of which are wielding horse slayers. Additionally, Phinora and Velthomer will deploy a small force of mages equipped with the long-range Meteor tome. These mages are positioned on top of the desert rocks; have Erinys pick the closest ones off while the Thracians massacre the Lance Ritter. (Note that there is, sadly, nothing you can do to help Quan.)

While the Travant will take his leave once Quan has been defeated, the rest of them will stick around, and that's bad news. They can do serious damage to any of your many mounted units, and Magorn is no joke. The best way to beat them is to survive their initial assault and then slaughter them using your archers. One method of doing this is to have a few fast units bear the brunt of the attack from inside the nearby town, as the evasion boost will be a lifesaver. Note that the normal dragon knights have fairly low stats, but Magorn can do major (and accurate) damage.

Once the dragon knights have been defeated, Phinora should be easy in comparison. However, be wary of the enemies' sleep staves and of Vaja's meteor tome, as she can strike twice with it and is much more accurate than the Velthomer mages. Since there are very few enemies surrounding the castle, it is recommended to have one unit draw Vaja's fire while a few powerful units (with high res to defend against the sleep staves) close in on Phinora. Sigurd is an excellent candidate for this, as Tyrfing gives him an enormous res boost. Vaja shouldn't pose much of a threat once you've closed the distance. Take care of whatever inventory management you need now: you won't get another chance.

Now for the final battle of the first generation: Duke Reptor. Reptor's army is very strong, and Reptor himself is arguably the most dangerous enemy in the first half of the game. His huge magic stat and his regalia, Mjölnir, allow him to do a massive 60 damage, and his skill is plenty high enough to get a hit in. Fortunately, you won't be entirely alone, as the Velthomer mages will betray Reptor as soon as he aggros.

Reptor will aggro as soon as one of your units steps onto the raised strip of land that Velthomer rests on. After this, Velthomer will open fire on him. They should be able to take down a couple units with some luck, but don't expect too much from them. Don't put any unit that can't tank 60 magic damage inside Reptor's range. The best way to take down Reptor is to make use of Lewyn and his powerful Forseti. First, ensure that he can tank the 60 damage. He should be able to manage it, especially if you have him promoted to Sage. Put him next to the cliff and put his lover and Sigurd next to him (plus a healer and Silvia for if things go wrong.) This should render all the enemy units barring Reptor himself unable to hit Lewyn. He will probably have to tear through a few grunts, but eventually Reptor will launch his attack. With any luck, Lewyn will be able to take down Reptor, and his army will disappear along with him.

Finish any remaining second-gen preparations, and then simply have Sigurd talk to Aida at Velthomer to complete the mission.