Kirk Thornton
[view]
“I...must return home alive. My family is waiting for me...”
—Dorcas in a support conversation with Geitz

Dorcas is a playable character in Fire Emblem: The Blazing Blade. He is first seen in Lyndis' story but joins Eliwood's group later on with his old friend Bartre, who also is a fighter.

Originally a mercenary working for a group of bandits Lyn and her friends are fighting, Dorcas defects to Lyn after learning that she is protecting his wife Natalie from the very same people he is working for. When asked why he is working as a mercenary, he responds that he is only doing so to earn money for his injured wife's treatments. Resolving to aid Lyn on her journey to Caelin, Dorcas helps her to defeat Lundgren. Following this, Dorcas returns home to Natalie, where he finds work as a mercenary fighting to protect the area from bandits.

On encountering Lyn in Chapter 15E/16H, Dorcas reveals that some time after Lyn's group had defeated Lundgren, he and Natalie had moved to Lycia and settled down in Pherae, where Natalie remains, awaiting Dorcas's return.

At the end of this journey, Dorcas earns the money he needs and returns home to Natalie. Here, he unhesitatingly pays for her medical treatments, thereafter living out the rest of his life in peace with her.

Dorcas is a reserved man, contrasting starkly to the more brash and headstrong Bartre. Despite this, Dorcas is known to love his wife, Natalie, dearly, willing to go to to any lengths necessary to obtain the money to treat her ailment, even resorting to banditry.

Dorcas has also been portrayed to avoid taking charity from anyone, choosing to earn his keep by his own means. This is exemplified through him declining Bartre's offer to try and get a raise from Eliwood. Similarly, he refuses to accept money that Farina tries to lend him.

Dorcas can either go one of two ways. With Lyn mode investment, he can last longer throughout the main campaign but still has to compete for Hero's Crest with units such as Raven especially and Guy, with the only thing he has over the two being 1-2 range access with bows. Without Lyn mode investment, he's much weaker but better than Bartre due to possessing a much higher speed base (6 vs 3) despite the lower growth (20% vs 40%, on average they only match speed (9AS) at level 18, which is a lot of investment for otherwise average at best units). At the very least, he has massive amounts of availability, being available midway through Lyn mode, and joining either on the first chapter (Eliwood mode) or the second (Hector mode). As the game goes on, his low speed, defense and resistance are going to be constant issues that will leave him vulnerable to enemy Mages, Mercenaries and Myrmidons, since they have decent magic/strength and much higher speed than Dorcas can ever hope to achieve. While he may have the most accuracy of the three warriors, this doesn’t mean much since axes have sub-par hit rates anyways. His option of using bows can give him an approach to these threats, but all three threats mentioned above can exploit the lack of 1-range the bow has on the enemy phase. His only saving grace is his high HP that allows him to survive a few attacks at most.

It’s also worth mentioning that Dorcas has one of the highest constitution stats of any character in the game, which makes rescuing him via riding units only possible with a promoted Rath. However, while this also allows him to wield heavier weapons with less penalty, his speed is so low that him getting weighed down by anything hardly matters to begin with.

Serene Warrior
A mercenary trying to earn money for his ill wife's treatment. Doesn't talk much and isn't expressive, but loves his family dearly. Appears in Fire Emblem: The Blazing Blade.

Pumpkin Smasher
A mercenary trying to earn money for his ill wife's treatment. He'd like to bring her back some treats. Appears in Fire Emblem: The Blazing Blade.

Dorcas is illustrated in the trading card game Fire Emblem Cipher with the following cards: 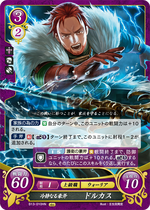 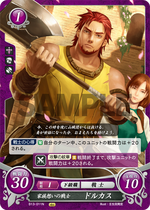 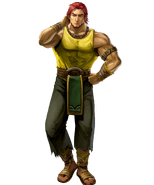 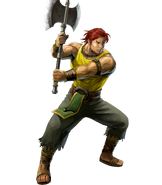 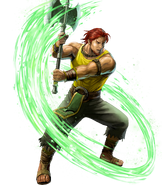 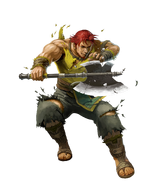 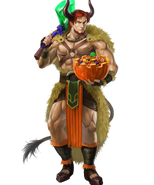 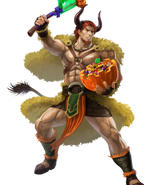 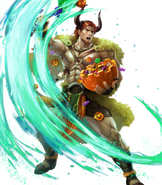 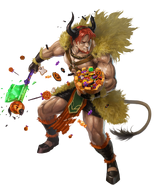 Dorcas as a Warrior in Fire Emblem 0 (Cipher).

Dorcas as a Fighter in Fire Emblem 0 (Cipher). 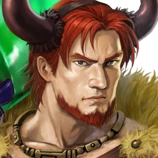 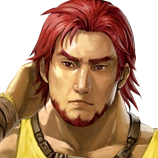 Dorcas as a Fighter.

Dorcas as a Warrior.

Dorcas as a Warrior holding a Hand Axe. 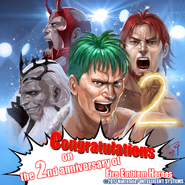