Archer
[view]
“I tend to get scared in an actual battle, and I get nervous and can't move like I normally do...”
—Dorothy to Perceval in a support conversation.

Dorothy is a playable character in Fire Emblem: The Binding Blade. An archer from Etruria, she is escort charged with the mission to protect Saul from danger and to keep him from getting into trouble from his womanizing ways.

She makes a brief cameo appearance in Chapter 18 of the Hasha no Tsurugi manga.

Dorothy is a rather reserved person. She often comes off as shy and nervous and has trouble thinking of what to say to people. She also has the odd tendency to talk to herself, as can be seen in her Support Conversations with Sin. She also tends to doubt herself, in her abilities and intelligence.

Dorothy is also greatly devoted to the St. Elimine Church, which is why she agreed to escort Saul. In her Support Conversations with Bishop Yoder she will express an overwhelming desire to want to be able to use healing staves to help heal people. She asks Yoder why it is that no matter how hard she prays she cannot use staves. Yoder replies to her questions with a story involving Saint Elimine, an Eagle, and an Owl, the basis of the story being that everyone has different skills that they can use to contribute and help others with.

Dorothy also has problems with being feminine. In her Support Conversations with Clarine, Clarine first approaches her exclaiming: "Why are you dressing yourself in men's clothes?". Clarine then spends a considerable amount of time trying to train Dorothy to be 'a lady' by teaching her etiquette and whatnot. However, Dorothy eventually decides that she just is not good at any of it and that she should give up, but Clarine suggests that the biggest thing Dorothy must fix is her confidence, and that a lady must be confident. In the process, the two become friends.

Dorothy also takes her obligation to guard Saul very seriously. She also constantly pesters him about how he tends to flirt with women. In their Support Conversations, she does just that and Saul in turn eventually provides 'a good excuse' as she had said he should have. In the final conversation however, Saul ends up having to flee after aggravating Dorothy thoroughly.

Description: A girl from Etruria in service to the St. Elimine Church.

Dorothy can see use during chapter 7 if using trade chains between her, Wolt and Sue with Bows to kill the two Wyvern Riders, but other than that, and her free deployment in chapter 6, there is little time she will see use unless the player wants to use her.

Her promotion bonuses are quite useful, but her low level in conjunction with the fact that she still cannot counter at 1 range and her infantry movement leave her with little redeeming her. Also, she competes with Sue and Shin for the first two Orion's Bolts, and they get both Swords and have higher movement upon promoting. Dorothy's growth rates are decent, but it will take quite a long time to salvage her low bases with them.

Dorothy - Gentle Archer (心美しき弓使い Kokoro utsukushiki yumizukai)
'"Dorothy returned to her hometown and led a normal life. She never was the flashiest or the most impressive among her comrades, but perhaps she may be the one who led the most fulfilling life afterwards..."'

Dorothy is illustrated in the trading card game Fire Emblem Cipher with the following cards: 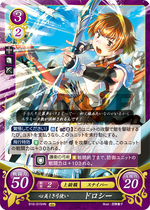 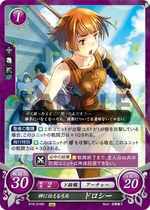 Dorothy is a feminine variant of the ancient greek name Dorotheos, meaning 'gift of god'. The name was popularized by Dorothy Gale, heroine of several Oz novels, such as "The Wonderful Wizard of Oz".

Dorothy as a Sniper in Fire Emblem 0 (Cipher).

Dorothy as an Archer in Fire Emblem 0 (Cipher).

Dorothy's portrait in The Binding Blade

Dorothy as an Archer