Chapter 16: Retaking the Capital (Joins in Chapter 16x: The Pinnacle of Light)

General
[view]
“I am a knight... If the king orders an attack, I must obey.”
—Douglas in a support conversation with Igrene

Douglas is a playable character in Fire Emblem: The Binding Blade. He is the Great General of Etruria, and is very loyal to his country. Douglas is also the adoptive father of Larum.

He first appears as an enemy, but if he is left alone he will become a playable character in the next chapter, and you will access the gaiden chapter for that level. Douglas was the first person to know that Elffin was truly Prince Myrddin and helped him escape to the western Isles with Larum, on the ship owned by Geese. After the war, he retired to live a peaceful life, with Perceval succeeding him as Great General.

In Chapter 16, the enemy Douglas will not attack Larum or Elffin. Either can talk with him, but he will remain an enemy.

Description: The Great General of Etruria. A respected veteran.

Of the four usable armored units in the game, Douglas is by far the best. This owes to his massive uninvested 46 HP and 20 Defense, letting him go the distance in a pure brawl with most physical enemies in the game, along with his excellent A-rank in lances and axes and 19 Strength letting him hit extremely hard. Unpromoted enemies tend to deal single-digit damage to him, and the many Nomad and Pegasus Knight enemies in coming routes often deal no damage to him at all. Unfortunately, his status as the best armored unit is mostly damning with faint praise, as Douglas suffers from many of the usual problems of an armored unit in Binding Blade. Being locked to lances and axes with none-too-great Skill, his accuracy rarely reaches 70%, his Speed is far too low to double, though he is at least fast enough to avoid being doubled by many common enemies, and his Resistance is poor. More importantly, he has only 5 Movement, and worse, 17 Constitution; he cannot be carried by any promoted unit barring Sin, and will therefore lag behind constantly. Douglas serves as a passable brick wall against common foes, but his flawed offense and bad mobility tend to hold him back from accomplishing much else.

Roartz: Douglas... Hmph! After all that you said, you've gone back on your honor!
Douglas: Indeed it may appear that way. But I fight true. I fight with my heart and I have confidence in our cause.
Roartz: Silence! Enough of your nonsensical rambling. Die here!

“This won't be easy.”
—Final Chapter Quote in The Binding Blade

Douglas - Lionhearted General (鬼将軍 Oni shо̄gun)
"Try as he might to retire from the military, Douglas received unending requests from Etruria to come back. Unable to refuse, he returned to the palace to lead the Etrurian Army once more."

Douglas is illustrated in the trading card game Fire Emblem Cipher with the following cards: 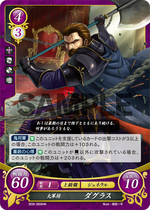 Artwork of Douglas in Fire Emblem 0 (Cipher) by Ippei Soeda.

Douglas as a General in Fire Emblem 0 (Cipher).

Douglas's appearance in Hasha no Tsurugi.

Douglas' portrait in The Binding Blade