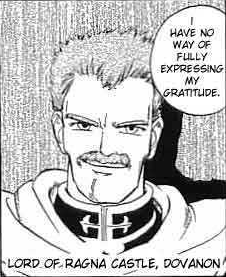 Dovanon is a manga character in Fire Emblem: Hasha no Tsurugi.

Dovanon is the lord of Ragna, a minor principality located in south western Lycia. He married a pegasus knight from Ilia, who gave birth to daughter, they named Celdia. After his wife passed away, Dovanon doted on his daughter, spoiling her to some degree.

When the Bern army invaded Lycia, Dovanon and his daughter Celdia led a resistance against the invasion from their castle, battling against the Bern infanty led by General Narcian's subordinate Zeed. As the battle reached a stalemate, Al and his companions arrived at Ragna to drive off the Bern army. At Celdia's request, Dovanon offered the Tanian soldier Gant a postion as Celdia's retainer, however Gant politely refused his request.

Shortly after, Zeed attacked Ragna with his main force, leading Dovanon to rally his weakened men against the foe. Zeed kidnapped Princess Tiena, and carried her off as his own war trophy. As Al and Gant left the castle to rescue Tiena, Dovanon remained behind to defend his lands. Once Al managed to defeat Zeed, Dovanon rewarded him and his companions with new equipment and bid them farewell as they left to discover the secret of the Fire Emblem.

Retrieved from "https://fireemblem.fandom.com/wiki/Dovanon?oldid=472489"
Community content is available under CC-BY-SA unless otherwise noted.