Dozel is one of the six dukedoms of the Kingdom of Grannvale in Fire Emblem: Genealogy of the Holy War and Fire Emblem: Thracia 776. It was founded by Nál, the Warrior, and ruled by Lombard and Brian (in the first and second generations respectively).

The Holy Axe Helswath is passed down the Dozel family. Their knights squadron is known as Grauen Ritter and it is led by Danann during the end of the first generation, and led by Brian in the second generation. The Helswath is used by Lombard and Brian during the game, although Danann has the potential to use it, but he doesn't.

After the end of the second generation, Lex's son/daughter becomes the ruler of Dozel if Lex was paired, otherwise Iuchar/Iucharba takes the throne. If there are no options, then Seliph rules Dozel from Belhalla.

A Grauen Ritter Great Knight as depicted in the TCG. 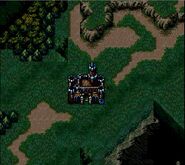