Josh Petersdorf
[view]
“Why do we live? Well, if you're not alive, then you're dead, and... Er...if you're dead, then you can't eat, and... What was I saying? I think I must be getting hungry. I wonder what's for dinner. My belly's a-rumbling!”
—Dozla in a support conversation with Rennac

Dozla is a playable character from Fire Emblem: The Sacred Stones. He is one of the game's pre-promoted units, and is the personal guard of L'Arachel, princess of the country of Rausten. He is first seen in Chapter 4, but can not be recruited until Chapter 11.

He is a Berserker from Rausten. His in-game description describes him as "a hearty man with a thirst for life." In Fire Emblem: The Sacred Stones, he helps L'Arachel, travelling beside her in her quest to fight evil.

Dozla can be seen travelling with L'Arachel and Rennac for the earlier part of the game. He is quick to do L'Arachel's bidding and is in many respects as 'free-spirited' as her. He often goes along with the unnecessary things she has him do, like pretend they are a random travelling group of warriors.

Unlike Rennac, Dozla does not feel the need to be paid for his work. In addition, he is one of the very few people who actually thinks as highly of L'Arachel as she does of herself. He is the total opposite of Rennac, fighting for the greater good and L'Arachel's ego instead of money. This can be shown in his B level support with Myrrh, where he ascribes her "funny feeling in [her] chest" with love for L'Arachel.

Dozla, as his in game description suggests, is a very lively man. Despite his rugged appearance, he is quite gentle and sensitive. In a Support Conversation, Dozla will make plans with Garcia to try new things like archery and magic. In the later conversations they talk about the meeting and what happened during them, for instance, at one point Garcia mentions how Dozla burnt off his beard while trying magic. Dozla then comments on how it 'grew back quite nicely' and how Garcia 'looked dashing without it'.

Dozla sometimes comes off as being "simple-minded". This is evident in his support with Rennac, when Rennac will demand 50,000 gold for traveling with L'Arachel, and claims he will bend 50,000 ears to get it, Dozla thinks he really wants 50,000 ears. However, it is learned later that Dozla just likes to tease Rennac from time to time, showing his humorous side.

As a Berserker, Dozla has the ability to cross water and mountains easily, both of which can greatly come in handy during many different battles. Dozla has a great enjoyment in fighting monsters. However, he is saddened when he has to kill other people, but insists he must protect everyone.

In his Support Conversation with Myrrh, he stated that he was turning 47 that year.

Dozla is a Berserker that will join the player's army alongside his master, L'Arachel. As a pre-promote, he requires little investment for the player to use and can begin contributing immediately after his join time. His high Strength and his passive critical hit chance increase from his class guarantees that he will be able to provide very high attack values when his use, and his high HP and good Defense make him a sturdy, difficult target for enemies to kill. While inferior to many growth units when trained, his ease of use and decent bases make him a solid fighter to use.

His weaknesses include his notably low Speed and Resistance, and his Con is immense enough that transporting him around battlefields with the Rescue ability is very difficult, if not impossible for most mounted units to do. While his low speed will not stop him from double attacking slower enemies, it will make it difficult for him to double attack enemies with even passable speed. Options exist for fixing this faults of his, such as Speedwings and the S rank Axe Garm, though these are rare and he competes with them among many other strong units.

Harvest Attendant
An attendant in L'Arachel's service. A hearty man with a thirst for life, who treasures children above all else. Appears in Fire Emblem: The Sacred Stones.

Dozla of the Steady Axe (豪傑戦士 Gōketsu senshi)
"As L'Arachel rose to become queen, he remained by her side. Watching L'Arachel grow to become the queen she was destined to be was Dozla's greatest joy in life."

A Support with L'Arachel
"L'Arachel was, in time, made queen of Rausten, with Dozla at her side, as always. Later, Dozla wept like a baby when L'Arachel was wed. His emotional outburst is remembered as much as, if not more than, the ceremony itself."

Dozla is illustrated in the trading card game Fire Emblem Cipher with the following cards: 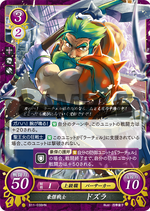