-
[view]
“The revived corpse of a dragon. Its putrid breath decays all it touches.”
—In-game description from Fire Emblem: The Sacred Stones.

The Draco Zombie (ドラゴンゾンビ Doragon Zonbie, Dragon Zombie in the Japanese version), referred to as Necrodragon in the English version of Echoes: Shadows of Valentia, is an enemy-only Dragon class that is introduced in Fire Emblem Gaiden. Undead dragons resurrected by dark magic, Draco Zombies originally attack by biting their foes, only breathing noxious fumes of fell breath on their foes in later iterations. Despite Gaiden being in continuity with the Archanea Series, Draco Zombies are the only dragons to have their existences left unexplained.

The Draco Zombie class is known as D Zombie (Dゾンビ D Zonbie) in its original inception in Gaiden, where it is feared as a class of formidable monster enemies that attack by biting. Certain Cantors, as well as Duma can summon them. There is a more powerful variation called the White Dragon.

Draco Zombies return in TearRing Saga: Utna Heroes Saga, where they are capable of spewing globules of fire in order to damage their foes. The breaths of fire that Draco Zombies in this game spew have differing attack ranges depending on their size; the small version is used for close-range melee attacks, while the large one is used to damage multiple foes in a single attack. Their breath weapons are classified as Fire Magic in this game.

Draco Zombies later reappear in The Sacred Stones, where they release fumes of toxic Wretched Air in order to damage their foes. Considered some of the strongest generic enemies in the game, two are only encountered on the main path in the penultimate chapter. Ten of them are also found at the last floor of the Lagdou Ruins.

In Fire Emblem: The Sacred Stones, when Lyon journeys to the Black Temple, he is confronted by Morva, who immediately recognizes him as the Demon King masquerading as Lyon. Morva is felled in an attempt to halt Lyon's advance, whereupon he is reanimated into a Draco Zombie. Bent to Lyon's will, Morva's soulless corpse is then used to guard the entrance of the Black Temple and prevent the advance of Eirika and Ephraim's army.

Two more Draco Zombies are later seen inside the Black Temple, where they are deployed to stop the group from reaching Fomortiis.

In The Sacred Stones, Draco Zombies use the powerful Wretched Air as their sole weapon of choice - this gives them a massive overall stat increase. While it has set damage, it functions much like Luna - it completely ignores the target's DEF/RES values. Their stats are very poor compared to other monsters, but most of this is fixed with their Wretched Air. Fortunately, their danger is limited by the fact that they only have 5 Movement.

Draco Zombies, like all monsters, are weak to the Sacred weapons, the Bishop's Slayer skill, and Myrrh's Dragonstone. As they are also draconic and flying by nature, anti-dragon and bows deal additional damage to them.

Try to fight one or two Draco Zombies at a time, as fighting more than that at a time can often result in a death of a unit since they can easily two-hit any character if both hits manage to land.

Concept artwork of the Necrodragon class from Echoes: Shadows of Valentia.

A Necrodragon as it appears in Fire Emblem 0 (Cipher). 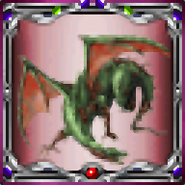 Generic class portrait of the Draco Zombie class from The Sacred Stones. 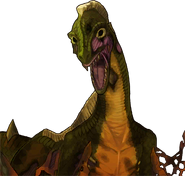 Generic class portrait of the Necrodragon class from Echoes: Shadows of Valentia.

Village sprite of Necrodragon from Echoes: Shadows of Valentia.

Battle model of the D Zombie class from Gaiden.

Battle model of an alternate-colored D Zombie from Gaiden.

Battle model of the Dragon Zombie class from TearRing Saga.

Battle animation of the Draco Zombie class from The Sacred Stones.

Battle model of the Necrodragon class from Echoes.

Map sprite of the D Zombie class from Gaiden.

Map sprite of the Dragon Zombie class from TearRing Saga.