The Dracoshield (竜の盾 Ryū no tate, Dragonshield in the Japanese version) is a Stat booster that recurs across the Fire Emblem Series. When used, the Dracoshield permanently raises its user's Defense by 2. In general, the Dracoshield is a rather uncommon item, and each acquisition of the item should be used on units suffering from low Defense growths.

In Gaiden and its remake, the Dracoshield is an item that can be equipped, restoring 5 HP each turn and raising its wearer's Defense and Resistance by 13.

In Genealogy of the Holy War, the Dracoshield is substituted by the Shield Ring (シールドリング Shīrudo ringu), an item that must be placed in the inventory of any unit in order for its Defense-boosting property to take effect. The Dracoshield is similarly substituted by the Shield Ring in Thracia 776, although this particular incarnation of the ring acts as an expendable item that permanently boosts its user's Defense by 2 when used.

In TearRing Saga: Utna Heroes Saga, the Dracoshield's equivalent is a potion that is simply known as the Defence Plus (DEFプラス DEF Purasu), permanently raising its user's Defense by 2 when used.

“An item that increases defense by 2.”
—In-game description, Shadow Dragon

While it may be tempting to use a Dracoshield on units with extremely low durability, such as Clerics, two points of defense will not provide much additional functionality to units that are already ill-suited for the frontlines. Dracoshields should be used on frontline units that are expected to take a lot of abuse, as the two points of damage reduction will really build up over several battles. Units with high evasion and weak but not terrible defense can benefit from Dracoshields as well. 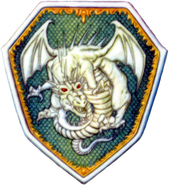 Official artwork of the Dragonshield from the TCG.

The Shield Ring, as it appears in the first series of the TCG.

The Dragonshield, as it appears in the fifth series of the TCG.

Official artwork of the Shield Ring from the TCG.