-
[view]
“A powerful immortal who lurks in the deepest darkness.”
—In-game description from Echoes.

The Dracul (ドラクル Dorakuru) is an enemy-only Monster class first introduced in Fire Emblem Echoes: Shadows of Valentia. Significantly larger and stronger than a standard Revenant or Entombed, the Dracul is a fearsome monster who appears rarely in the Thieves' Shrine, Seabound Shrine and Sylvan Shrine.

"Dracul" is a Romanian word that means "the devil", and is also derived from the Latin word draco, meaning "dragon". This monster's name is also evocative of the old Romanian emperor Vlad Drăculea, and was nicknamed Vlad Țepeș, "Vlad the Impaler", reflecting how he would punish his enemies by skewering them on large pikes and hanging them. Vlad Dracula also served as the inspiration for Bram Stoker's Dracula character, who was a vampire. 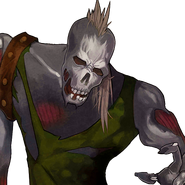 Generic class portrait of a Dracul. 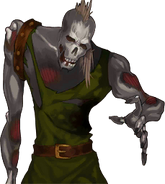