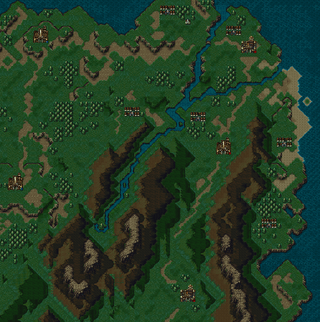 Chapter script
[view]
“The two faces of the Thracian Peninsula are as distinctive as night and day. The peninsula's north, once ruled by several small kingdoms, is graced with rich pastures, while the south, the Kingdom of Thracia, is a harsh wasteland dominated by vast mountains. In ages past, seeking to claim the life-giving northern land as their own, Thracia's infamous Draco Knights have led countless brash attempts to conquer the north, only to be repelled at every turn by the might of House Leonster. Thracia looked to have won at last following their slaughter of Leonster's army in the Aed Desert, only to be defeated in turn by Bloom of Friege, who claimed the land as his own. And so, the so-called Kingdom of North Thracia was born as yet another servant of the Empire. Over a decade has passed since then. Not even Thracia's King Travant, an ambitious man with a thirst for power and glory, dares to challenge the will of the Empire, and so a strange peace looms over the region. Or so it did, until the arrival of Seliph and his liberation army. Bloom's defeat at his own castle has abruptly tipped the balance of the Thracian stalemate. Both the Ulster and Leonster territories now lie under the liberation army's control, forcing Bloom to retreat to Conote and muster the strength to take Ulster back. The southern Manster Castle, governed by the "goddess of lightning", Princess Ishtar, braces itself for the threat of Thracian invaders. Meanwhile, across the border itself, both King Travant and his border watchman, General Maikov of Mease Castle, remain eerily silent. The people are united in their fondest wish: for the entirety of the Thracian Peninsula to return to the rule of House Leonster. And so dawns yet another battle...”
—Opening Narration

Dragon Knights of Thracia is Chapter 8 of Fire Emblem: Genealogy of the Holy War.

This chapter is one of the easier ones in the game, especially compared to the next one.

For the first few turns, the worst thing to do is hunker down and wait for the enemy to attack. You should press north toward the trees as quickly as possible so you have defensible ground. You should also follow Lewyn's advice from the cutscene and send a mobile unit such as Oifey, Fee/Hermina, or someone with a Leg Ring north to help Leonster Castle out, as the Vampa/Fetra/Eliu trio will attack there quickly and even if Finn is a good level, he should probably not fight them alone as Leif and Nanna are too underleveled to help him out. Keep in mind that Vampa, Fetra and Eliu can perform a Triangle Attack; you want to take at least one of them out as quickly as possible (preferably Vampa, due to her Leadership Stars) so they cannot do that. The other two will fall fairly quickly after this.

While Ovo's and Muhammad's armies might seem large and intimidating, that is all they are: the units are easily picked apart due to their relatively low stats. There are plenty of Forest tiles around Muhammad that you should utilize, and sticking to the correct side of the weapon triangle will end Ovo quickly.

The reason waiting is a bad idea is because Febail appears as an enemy on Turn 3, and Ishtar appears with the Mjölnir on Turn 5, and they waste no time rushing over to attack you. Once Ovo and Muhammad are taken care of (which shouldn't take long), hurry Patty over to recruit Febail (you can't bait him, since probably none of your units can take a hit from the Yewfelle, but Patty has more Move than Febail so she should be able to close the gap without taking any damage). To ensure that Patty doesn't get caught out by him, you can follow Lene along with her for the dance boost to ensure she can talk to Febail from outside his attack range. Once Febail has joined your ranks, turn him around to face Ishtar. He is able to take her out in one hit with the Yewfelle, and his accuracy is great, so he is by far the best choice to take her on. (Note that Asaello can do no such thing.) Julius will then teleport her away, leaving you free to continue.

From here on out, the chapter is a cakewalk. As long as you don't let the three long range mages focus down a single unit with their Boltings, you can push straight to Conote. Attacking Conote is your next hurdle, but since Bloom doesn't have the Mjölnir anymore, he is a much easier boss than he was in the last chapter. However, beware of his Bolting tome, and Thoron is nothing to scoff at either; still, a holy weapon-user will take him out quickly, or if you want to level-grind your units he is useful for hit-and-heal strategies, as he doesn't hit very hard but he can take a lot of punishment.

Make sure to quickly move 2 or 3 units down to rescue the two villages on the bottom right of the map, as the farthest one gives a Thief band.

Be careful for the thief enemy with the Wing Clipper blade. If it hits your unit, it will steal ALL that unit's gold, and there is no way to get that gold back.

Next up are the titular Dragon Knights of Thracia. They prefer to hit-and-run, but the wyverns are not very durable, especially once you recruit Ced from Munster Castle; whether he just has a Lightning tome or Forseti itself, Ced tears right through the resistance-lacking wyverns. Rescue the children around here for some free level-ups for any underleveled units. Ignore Altena, since she will not move and neither can you come close enough to talk to her, and seize Meath, ending the chapter.