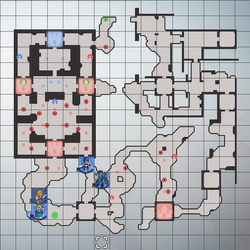 With Chrom and his Shepherds joining their ranks, the party makes haste for the temple belongs to Aytolis, where one of Chrom’s Shepherds are protecting the temple’s army and guardians. However, upon arrival they discover it's as mired in chaos as everything else. The party soon found out that the army from which Darios originally belonged from, the Gristonne army are attacking the temple under leadership of Oskar’s hired villain, Validar, much to Darios’ disbelief for what his father had commited.

This chapter is fairly easy, and doesn't take much time to complete. Seize all the forts in the temple, while taking advantage of the weapon triangle. Have your main lord and Chrom seize the left fort, Frederick to seize the right fort, and Lissa to seize the bottom fort. After you do that, Validar will appear in another fort on the other side of the map. It is recommended that you use Lissa to fight him, since she performs well against mages.