[view]
“I received word from Sir Malledus to ready a vessel, that we might slip away discreetly by sea.”
—Draug to Marth in Shadow Dragon

Draug (Aidraug in the Italian and European-Spanish versions, Edgar in the French version and Edrag in the German version) is a playable character from the Archanea Series of Fire Emblem. Draug is an armoured knight in the service of Altea, participating in both campaigns that Marth engages in.

Chronologically, Draug makes his first appearance at the end of Prologue IV in Shadow Dragon, where he and Norne meet up with Marth and his retainers after they manage to reach the escape point near the borders of Altea. After briefly introducing Norne to Marth, he then leads the small battalion to a vessel that he had prepared prior to their arrival, granting them the opportunity to successfully evade the Gra forces and seek refuge in Talys.

During the events of Book 2 of Mystery of the Emblem and its remake, Draug will aid Marth in the War of Heroes right from the first chapter. When the war is brought to a conclusion, Draug, under Marth's behest, assumes the command of Grust's garrison.

Draug appears as a "Knight" Mirage, and Mamori Minamoto's partner. Similar to Chrom, he comes from a different world and has lost his memories. He’s a heavy-armored soldier that prides himself in his absolute defense and ability to support his allies. He transforms into an axe in battle and lends his strength to Mamori.

More aspects to Draug's character are unveiled through his base conversations with Kris in New Mystery of the Emblem, where it is revealed that he is a humble individual; in spite of the valour that he has displayed on the battlefield, he chooses to be taciturn instead of vocal about his achievements. He is also portrayed as an honour-bound person, refusing to claim credit for achievements that he has not attained. This is clearly evidenced through his repeatedly persisting in disproving the rumours that paint him as a figure of exceptional strength and talent, in spite of Kris relentlessly describing him as such.

While they do not converse together in any of their appearances within the games, it is said Draug is good friends with the archer Gordin and his younger brother Ryan. This friendship is depicted more in official artwork and supplementary material like the anime. They also have support bonuses in their appearances in the DS remakes.

Also, unlike in Mystery of the Emblem, enemy reinforcements are relatively easy to deal with in the original Fire Emblem, thus Draug here isn't even entirely valuable as the fabled choke-point holder he is made to be.

In Fire Emblem: Mystery of the Emblem, Draug can be a wildly mixed-bag due to various gameplay factors. Draug's one big previous flaw is the level and stat cap for lack of promotion. Here, Draug can promote.

One infamous aspect of Mystery of the Emblem is its insidious amounts of reinforcements that, if not kept in check, can overwhelm the player and result in harsh causalities. In Book 1 particular, Draug shines as he can be vital - granted he is trained well enough - in blocking off the enemy swarms at choke-points, especially if the player doesn't play stages like Ch.13 (The Battle for Altea) and Ch.16 (Camus the Sable) fast and hard.

This is not (entirely) the case in Book 2, as level design often takes account the possibility of Draug blocking enemy advance, and magic using enemies are much more common. Player might ultimately favour Tiki as the choke-point holder against Book 2's worst late-game swarms.

In Book 1, Draug can get upstaged by Dolph (who joins just before the worst reinforcement maps of Book 1) and Lorenz in certain aspects. In Book 2, Draug may often find nothing much to do until the late game, as lot of the final chapters take place indoors and Cavaliers/Paladins are forced to dismount, eliminating their use of Lances that Armor Knights can. That said, before those final levels take place, Sheena can be recruited to player's army and she can be a viable Lance user in the final chapters.

To make sure Draug actually can hold the defences, he needs to an active part of player's army to gain the enough EXP to not fall behind.

In Shadow Dragon, a majority of Draug's problems present in the earlier games have been rectified, allowing him to be a rather useful knight if effort is expended on him. While he has slightly less defense than other Knights, he makes up for it by having more Strength and HP (including a high +10 bonus when he is promoted into a General). Furthermore, his stat spectrum is extremely balanced in spite of his being a knight, with high Speed and Skill growths (more than his Defense as a knight). However, as he possesses low Defense, it is thus recommended to keep him as a Knight in order to retain his decent Defense growth. Given these facts, placing Draug on the front-lines is a sound idea, as he can withstand onslaughts from powerful foes, as long as they are not magic users. If he is not reclassed, his incredibly low speed base will make him susceptible to being doubled and maybe even one-round killed after chapter one on higher difficulties, laughably diminishing his usefulness as a tank.

Gentle Giant
An armored knight of Altea who served as Marth's shield. Very sincere. Appears in Fire Emblem: Mystery of the Emblem. 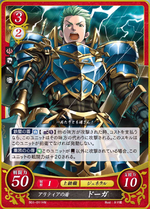 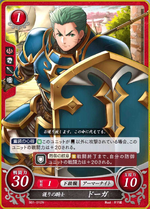 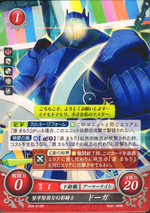 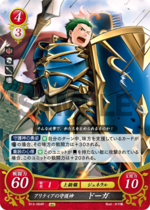 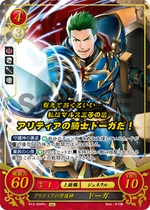 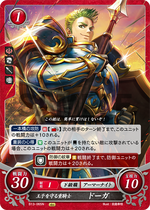 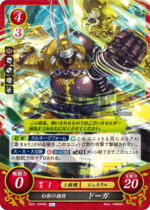