Canto
[view]
The Duke Knight (デュークナイト Dyūku naito) is a horse-mounted combat physical class for that appears exclusively in the Jugdral Series of Fire Emblem Series and TearRing Saga: Berwick Saga. The promoted form of the Lance Knight, Duke Knights are armed with Lances as their primary weapon of choice and switch to Swords when dismounted in Fire Emblem: Thracia 776.

In its original inception in Genealogy of the Holy War, the Duke Knight class is introduced as the promoted form of the Lance Knight class, wielding Lances as its sole weapon of choice.

In Thracia 776, the Duke Knight class, like all other mounted classes, is forced to dismount from its steed in indoor chapters. When dismounted, Duke Knights lose the ability to wield Lances and are locked to wielding Swords instead.

In TearRing Saga: Berwick Saga, the Duke Knight is essentially a fusion of the Paladin and Lance Knight, the latter being a tier 2 class in the game. It is capable of using Swords, Spears, Small Shields, and Medium Shields like the former, but also has the ability to use the Lance subweapons like the latter, making it the strongest mounted class in the game, only rivaled by the enemy-only Black Knight. The player army can recruit only one Duke Knight, Clifford.

The Duke Knight class is retired from the series thereafter, its role taken up by the Paladin and Lance Paladin classes in Path of Radiance and Radiant Dawn respectively.

In Vestaria Saga I, the Duke Knight is known as the Knight Duke. It is an enemy-only class that wields Lances, Throwing Spears and Axes.

In Genealogy of the Holy War, Duke Knights have much higher Strength than Paladins, but their Skill and Speed are slightly lower. They have an A rank in Lance proficiency.

In Thracia 776, Duke Knights are outclassed by Paladins in every way because of a new weapon rank system, both classes having the same stat caps, and the dismounting feature makes them both switch exclusively to swords dismounted.

In Berwick Saga, Duke Knights are the best cavalry unit available to the player army. The class caps its spear skill at 60, making it one of the few classes with a cap above 50 and the only playable class with a Spear rank that high. This means Duke Knights will have a critical bonus for each Spear point above 50, such as a Duke Knight with a 60 Spear rank having a 10% critical bonus. Along with Lance Knights, Duke Knights are the only playable class able to use the Lance subweapon type. Their sword cap reaches 30, making them able to use that weapon competently as well. The class has 50 cap in both small and medium shields. All in all, Duke Knight is a powerful class, offset only by its rarity.

A Level 1 Duke Knight, as he appears in the second series of the TCG.

Battle model of Quan, a Duke Knight from Genealogy of the Holy War. 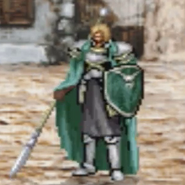 Map sprite of the Duke Knight class from Genealogy of the Holy War.