Gideon Emery
[view]
“Oh, Father, there’s no shame in standing by to help when needed. Isn’t that what a good butler does? Serve, not show up his masters.”
—Dwyer, Paralogue 4

Dwyer is a playable character in Fire Emblem Fates.

Being the son of Jakob, Dwyer grew up with much pressure from his father to become a butler. Although he does become a fine butler (even surpassing his own father), he tends to refrain from fighting, sticking to healing and helping his allies rather than fighting the enemy.

In his Paralogue, Jakob visits his Deeprealm to deliver his favorite coffee beans. However, to Jakob's surprise, invisible forces have infiltrated Dwyer's Deeprealm and is attacking his house. Jakob quickly rushes to rescue his son. Hearing the commotion outside, Dwyer decides that the best course of action is to stay inside and let his caretakers defend him. In the meantime, he promises to keep them healthy until he can be rescued. Jakob misinterprets his inaction as laziness and when Dwyer finally reunites with him, Jakob chastises him for not fighting, even though he is healing his comrades. Dwyer rebukes him, saying that healing does as much good for others as fighting. He even adds that he taught him how to be a good butler, and that is done first by serving others, not showing up his masters. Jakob continues to chastise him, saying that there is more worth protecting others through their bodies rather than healing in the back. Jakob vows to show Dwyer how to properly be a butler, and Dwyer agrees to see how it is done.

After the battle, Dwyer finds out that all of his caretakers had abandoned him in the aftermath. Suddenly, an invader sneaks up behind Jakob, and Dwyer leaps into action to protect him. Jakob is amazed that Dwyer's "Slappyface" attack managed to down the invader, leaving him to wonder why Dwyer did not fight earlier. Dwyer explains that it was their job to watch over him, so he did not want to take away their work from them. Dwyer decides to join the army and even declares that he will become a better butler than his father. Jakob takes this as a challenge and looks forward to their battle of the best butler.

After the war, he continued serving as a butler, being famous for his tea extraction methods.

Dwyer is normally seen competing against his father in some form or manner. Although lazy and apathetic, his motto is "work before rest". He hates being ordered around by others, but when he is left alone, he takes care of chores splendidly. He is a naturally skilled butler and combatant. His specialty is brewing coffee, something that Jakob and his mother admits is better than Jakob's own specialty brew.

Similar to his father, Dwyer strongly wishes to serve Corrin as their butler (if he is not already Female Corrin's son). During their support conversations if the two are unrelated, Dwyer always heavily hints of how he would be a better butler than his father and how Corrin should employ him instead. His supports with Jakob and Asugi reveal that he's a master at hand-to-hand combat, but he considers this talent to be virtually useless against enemies with weapons. Due to Jakob's hellish combat training while he was a child, even without training he's able to retain all of his fighting skills.

Compared to Jakob, Dwyer is noticeably more considerate towards others. Many of his supports show how he takes care of others purely out of instinct, such as adding cardamom and cinnamon to Nina's tea after noticing that her voice was a little hoarse. He can be very blunt in his opinions, but he is far less coarse in expressing them. He is also very charming to women, acting very gentlemanly around them and is perceptive of other people's feelings.

He has a strong no-nonsense personality, however, when it comes to cleanliness, manners, etiquette, and overall common sense. His supports with Kiragi show that he has strong "butler instincts" and that he refuses to take any nonsense from nobles, both of them traits passed down from his father. He also feels very uncomfortable when others call him a kind person. While he is very lazy, he does not see caring for his friends as work.

He has the most hidden talents.

Dwyer inherits Jakob's emphasis on being a physical combat unit, which conflicts a bit with his base class of being a Troubadour healer. Regardless of his mother, he has a positive Strength and Skill cap modifier and usually has positive Speed caps for most mothers. His Defense and Resistance modifiers relatively low in and his Magic does not leave much room for any potent healing in his base class or its promotions. His Personal Skill Born Steward, makes him great for PvP and StreetPass battles as he receives battle bonuses whenever he is involved in a My Castle battle. Overall, he is suited for combat, rather than healing, much like his father. He starts off with Resistance +2, giving him short term stat help, but best dropped for other better skills. He also has Gentilhomme for battle support bonuses to nearby female allies.

Dwyer's two promotions are the Strategist and Butler classes. Strategist is more supportive oriented, though his low Magic leaves him inferior to Elise, Forrest, and a reclassed Felicia as both a combat and supportive Strategist. He learns Rally Resistance and Inspiration, two useful supportive skills, but will take away skill space from his prowess as a combat unit. The Butler class is much more tailored to his offensive capabilities as Shuriken and Daggers are strength based. While his heals are even weaker in the class, if training is put into leveling up his Staff mastery to S, he can be another user of Bifröst, which works regardless of his Magic stats. His first skill Live to Serve, allows him to heal himself whenever he heals allies. It can be useful if he has no HP recovery method himself and has the obvious benefit of healing two units at once. Tomebreaker makes him an effective Mage killer as his weapon advantage with Shuriken over Tomes is capitalized with this skill.

Dwyer is illustrated in the trading card game Fire Emblem Cipher with the following cards: 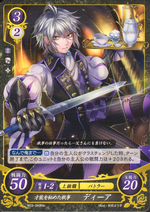 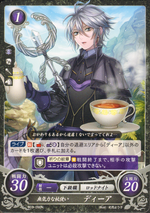 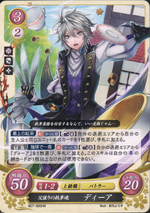 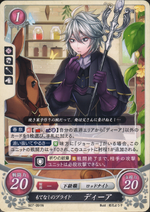