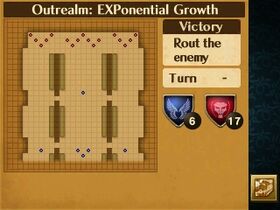 Chapter script
[view]
“The Entombed—noble Risen who are extremely rare in numbers and are said to grant valuable experience to those who fight them. By Anna's request, Chrom goes to exterminate them...”
—Opening Narration

EXPonential Growth (Entombed Heaven in the Japanese version) is Xenologue 14 of Fire Emblem Awakening. This chapter takes place in the Outrealms.

A whole legion of Entombed attempt to make a timely escape towards the south of the map. Like the gold-loving Risen from The Golden Gaffe, the Entombed do not bother to attack, but will retaliate when attacked. Unlike the enemies in The Golden Gaffe, however, the Entombed do not have the pass skill; if they are boxed in on all four sides, they will attack one of the player's units. The Entombed are equipped with skills like Underdog, Miracle, and weaponbreaker skills to make killing them more of a challenge. Be careful when attacking the Level 30 Entombed; they have Counter. It will take 4 to 5 turns for all of the Entombed to flee the map.