Chapter 11A: The Hero of the Western Isles

Julia Mcllvaine
[view]
“I have a plan to build a new village on the Western Isles for those people who lost their homes in the war.”
—Echidna in The Binding Blade

Echidna is a playable character and a Hero from Fire Emblem: The Binding Blade. Echidna is the leader of the resistance force against the Etrurian government in the Western Isles.

In the northeast side of Chapter 9 there are two villages. She is recruited only if a unit enters the village on the left or neither village is visited. Echidna is recruited when Larum talks to her. During the battle in Chapter 11, the Etrurian soldiers surround the house she is in and threaten to kill her if she does not surrender. In her supports, she attempts to gain recruits to help her in her plan to make a "free village", a village where people in the Western Isles who had their homes destroyed could settle after the war.

Description: The leader of the resistance on the Western Isles.

Echidna stands out quite a bit due to her axe rank, which, at base B, is one of the higher ones in the game (only surpassed by Bartre). She has very high Skill, meaning that unlike many other axe-users, her accuracy is entirely acceptable, and she can switch to swords if need be. Though her Constitution is low enough that she loses Speed from many axes, her base Speed of 18 is incredibly high, and when using a lighter axe such as a Killer Axe, she can still double the majority of enemies. 13 Strength, though not excellent, is enough when backed up by the power of her axes and reliable doubling for her to one-round or at least severely damage many enemies. This makes her viable throughout the midgame as an effective combat unit who surpasses most others. As there are few other strong choices for an axe-user, Echidna should be the player's first pick to wield any axes they find.

Though Echidna may have a strong start, she tends to suffer somewhat in the lategame. Her durability, though not bad by any stretch, is also not particularly great; she tends to have trouble surviving more than one or two hits from physical enemies, though her Resistance is actually fairly good. Her class also lacks much in the way of utility, being more or less strictly combat-oriented, which can cause Echidna to lose ground once powerful mounted units like Lance or Shanna hit their stride. Enemies she cannot double with axes also become more common, forcing her to rely more on her weaker swords, and her growths are generally quite poor.

That said, Echidna's start means that the use of statboosting items can help her maintain her usefulness to the endgame. A Body Ring will significantly lessen her Speed loss with axes, and an Angelic Robe or Dracoshield should move her durability up to the point of surviving another few hits. Echidna's Ice affinity means a support can further patch her Defense, most notably with Larum. The most interesting niche she can fill, however, is as a wielder of the Armads. Her Speed remains reasonable enough with the weapon in hand, and on a campaign where she has been recruited, she is the character most likely to be able to wield it, due to her frequent doubling allowing her to build axe rank fairly quickly. The Armads solves both of Echidna's greatest statistical issues, giving her a +5 to Defense and a massive boost in offense due to its insane Might. With the weapon in hand, Echidna can one-round most Manakete enemies even at base, though like many, she will fear their counterattacks.

Echidna is very often compared to Bartre, who is mutually exclusive with her due to the route split. Both are prepromoted axe infantry with potential Armads use, meaning they tend to fill the same niche, though they execute it differently. Generally, Echidna is superior in terms of damage output due to her doubling abilities and greater accuracy, while Bartre distinguishes himself through higher durability and his access to bows for combating fliers. This places the difference largely down to player preference.

Unyielding Idealist
Resistance leader of the Western Isles. She's highly capable and many rely on her. Appears in Fire Emblem: The Binding Blade.

Echidna - Goddess of the West (西方の女神 Seihō no megami)
"After Echidna went back home to the Western Isles, the people were overjoyed at the return of their hero. She left the rebel group, but the people begged her to be their leader once again. Her hard work united the Western Isles into a new nation, the Western Union."

“People on the Western Isle, don't give up!”
—Echidna's death quote in The Binding Blade

Echidna is illustrated in the trading card game Fire Emblem Cipher with the following cards: 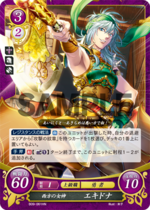 In Greek mythology Echidna was a female monster who spawned in a cave and mothered every major horrible monster in the myths. "Echidna" also refers to a species of monotreme native to Australia, noted for the thick wave of spines on its back.