Dragon Rider
[view]
“Your kindness has not gone unnoticed by Dáinn and Njörun. You must believe in our victory. Now, I must go out and fight as well!”
—Eda, in a conversation with Linoan

Eda is a playable character from Fire Emblem: Thracia 776. A 21-year-old Dragon Knight from Thracia, she is the younger sister of Dean.

Eda first appears in Chapter 13, where she, Dean, and Glade survey the dire circumstances of Tahra's invasion and discuss what to do to continue its defense. When Eda recklessly offers to engage the enemy alone, Dean stops her, explaining that she will make a perfect target for the ballistae before imparting the hit-and-run tactics of dragon riders.

While the Empire is poised to launch a full-scale attack on Tahra in Chapter 14, Eda shares a conversation with Linoan, where it is revealed that Dean is not present for the pre-battle meeting due to being uncomfortable in such formal settings.

Eda then goes on to continue supporting Leif in his cause to liberate Northern Thracia from the Grannvale Empire. She stays at Altena's side thereafter, serving as a source of comfort for the devastated princess. Eda never seeks out her own happiness, choosing instead to devote her life to rebuilding Thracia and supporting Altena.

Eda is portrayed as a knight who is fiercely loyal to her duties to a fault. This is shown through her readiness to recklessly rush into the field of battle alone, sacrificing her life to engage the enemy.

Eda's self-sacrificial nature extends to her interpersonal relationships, where she, even after the New Kingdom of Thracia is established, chooses to serve as Altena's aide instead of seeking out her own happiness.

Eda's main strength comes from her flying utility in outdoor chapters. This gives her a niche of ferrying around less mobile units and visiting far-off villages.

Outside of this niche, Eda's mounted combat is decent, as her B rank in Lances enables her to use every lance in the game at base aside from the Master Lance.

“I promise I'll do better next time!”
—Eda's escape quote

Dean: The full-scale attack has begun... Well, what do we do, Glade?
Glade: We're far outnumbered. Our defeat will only be a matter of time.
Eda: Shall I go derange the enemy lines? It should buy some time for us.
Dean: No, that won't do. The enemies have ballistas. You'll just be a perfect target if you go out alone. The basics of fighting from dragon-back are to run in for a surprise hit, and then immediately retreat. You must never rush, Eda.
Eda: Yes, my brother.
Glade: I will send out my knights.
Dean: Will that be enough? The mercenaries all fled.
Glade: Hm... What about Prince Shanan? If he is a direct descendant of the Sword Saint Odo, he must have power far greater than ours. Why does he refuse to help?
Dean: Oh...him. He apparently has no interest in battles in lower places.
Glade: Hmph, and he spends his time playing with the women, eh? ...We have no choice. We will have to fight on our own.
Dean: Be careful. This is only the beginning. ...The worst still has yet to come.
Glade: I know.

Eda: Lady Linoan, the attack has begun.
Linoan: The Empire's full-scale attack... What is Lord Leaf doing?
Eda: The prince is having a meeting with the other commanders.
Linoan: I see... Is Dean with them?
Eda: Dean is watching the south gate because he doesn't feel comfortable at meetings... My brother can be difficult at times.
Linoan: No, I would never have survived without him. After my father was killed, our mansion was taken away, and for two years I was unable to even go outdoors freely. The cruel surrogate would constantly threaten me to tell him where the prince was. The thought of that abuse still sends shivers down my spine... But then...Dean rescued me from that nightmare. He protected me from assassins from the Empire, and always cheered me up when I was about to break down. He always laughed it off, but I was sure he was a well-known mercenary. I never knew he working under Lord Arion...
Eda: Prince Arion knew about the danger Tahra was in, so he secretly ordered my brother to rescue you. Dean was so pleased at the trust the prince was putting in him that he abandoned the army to fulfill the prince's commands.
Linoan: Lord Arion...went through that much...?
Eda: He couldn't leave the country, but then again, he couldn't let you, his fiancee, die... I can only imagine how troubled he was. Anyway, please don't worry, Lady Linoan. Your kindness has not gone unnoticed by Dain and Njörun. You must believe in our victory. Now, I must go out and fight as well!

"After the founding of the New Kingdom of Thracia, Eda became a close friend and confidante to Altena. Eda tried her best to raise her spirits, as the war and its revelations had taken their toll on Altena. She took her duties so seriously that she never concerned herself with her own well-being. Ultimately, Eda sacrificed her own happiness to better devote herself to serving Altena and the restoration of Thracia."

Eda is illustrated in the trading card game with the following cards: 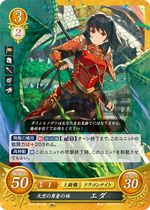 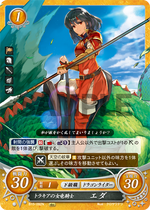 Eda as seen in the Fire Emblem Trading Card Game

Eda as a Dracoknight in Fire Emblem 0 (Cipher).

Eda as a Dragon Rider in Fire Emblem 0 (Cipher).