Priest
[view]
“You're right... We must do all we can to end this war as soon as possible. Prince Jamke, I would sooner not burden you alone, but you are our only hope to persuade King Batou to end this.”
—Edain, in a conversation with Jamke.

Edain is a playable character from Fire Emblem: Genealogy of the Holy War. She is Sigurd's childhood friend, and one of the two daughters of Duke Ring of Yngvi. Her lost elder twin sister is Brigid, and her younger half-brother is Andrey. If paired up, she will be the mother of Lester and Lana.

Despite initially training as a knight, Edain became a cleric in order to aid her chances of finding her long-lost sister, who was kidnapped by pirates at the age of five. The game's events begin with Edain's capture at the hands of Prince Munnir of Verdane after Yngvi is conquered. Her childhood friend, Sigurd, embarks on a mission to rescue her that eventually escalates into an invasion of Verdane. In Chapter 1, she is freed alongside Dew by Prince Jamke, whom she later recruits to Sigurd's cause. In Chapter 3, she reunites with Brigid and gifts her with the Yewfelle, which she had been carrying since the war's beginning.

Edain is gentle, graceful, but despite having the characteristics of a romantic heroine, she isn't concerned about romance. She isn't the type of woman to be head-over-heels in love. Edain holds respect for Sigurd because he is among the rare nobles that she perceives as not being attracted to her, despite her beauty. [1]

She is a kindhearted, friendly and proper lady, but under her delicate demeanor she hides a strong will and very headstrong personality, being the only one that never gave up finding her twin sister while everybody else lost hope, and the fact that she was one of the few people that found a way to survive the battle of Belhalla. Her personality is fitting for a cleric, which Sigurd points out during their conversation in Chapter 1. She is shown to dislike violence, and wishes for the war in Verdane to end peacefully. In contrast to Brigid, she does not appear to be willing to kill their brother Andrey, although she condemns his immoral actions.

Being of the Lena Archetype, Edain fills the role of the dedicated healer. Her base stats are quite solid, and combined with her Mend Staff, she will immediately be able to heal a whopping 46HP as soon as you get her, allowing her to restore any character to full health no matter how badly they're hurt. While she is a significantly more capable healer than Ethlyn, she unfortunately suffers from very low Movement, making it so that she will have trouble getting to wounded mounted units unless they slow down or come to her. Luckily, in Chapter 2, Edain can obtain the Physic Staff to alleviate this issue so that she can act as a healer from a longer range.

While Edain is an excellent healer, her combat capability is unimpressive due to her complete lack of skills, access to only C-level Tomes, mediocre Speed and low overall durability. Even though she does gain the ability to wield tomes after Promotion, she will likely do best maintaining her role strictly as a healer.

Edain can have a bit of an awkward time finding a suitable husband, as one of her children is a physically-oriented Bow Knight (Lester), while the other is a magic-oriented Priest (Lana). On top of this, Lester can only wield Bows, which narrows down the options she can choose if she wants Lester to inherit a decent weapon. To further complicate things, Edain has no skills, and in particular does not have Pursuit, which means if the father does not have it either, Lester will have trouble doing respectable damage (while Lana will always do her healing job respectably well)

All of these things taken into account, Edain is best paired with Midir or Jamke. Azelle, Claud, Beowolf, Arden, Alec, and Finn are decent choices that have flaws to them. The rest of the males should be avoided as they cannot pass on any weaponry, do not have Pursuit, do not offer notable skills, or are a bad fit statistically for her children.

In Chapter 1, Sigurd may speak to Edain, but nothing will result of it.

In Chapter 1, either Midir or Azelle may speak to Edain, resulting in her gaining 100 love points with the conversation initiator.

In Chapter 1, if Edain speaks to Ethlyn, Ethlyn will receive the Return staff.

In Chapter 1, after Genoa Castle is captured, Dew may speak to Edain, resulting in her receiving the Warp Staff.

In Chapter 1, if Edain speaks to Jamke, he will be recruited.

In Chapter 3, if Edain speaks to Brigid, Brigid will gain the Yewfelle.

In Chapter 4, if Edain is in love with either Jamke or Midir, she may speak to her lover, resulting in him receiving the Brave Bow.

In Chapter 4, if Edain is in love with Azelle, she may speak to him, resulting in her receiving the Rescue Staff.

In Chapter 5, if Claud is in love with Edain, he may speak to her, resulting in her receiving the Rescue Staff.

Edain's part in the manga is similar to her canon appearances, albeit somewhat more active than in the game. She also is extremely plucky and resourceful, if not downright fearless: she risks herself greatly to heal an almost dying Azelle right after being released from captivity, then recruits her future husband Jamke via calmly standing between the Verdane army and Sigurd's own to face him, and actively seeks out Brigid to recruit her and give her the Yewfelle.

Edain is illustrated in the trading card game Fire Emblem Cipher with the following cards: 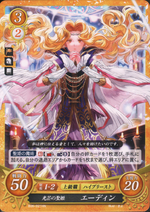 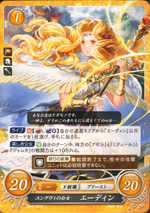 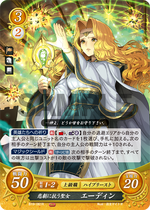 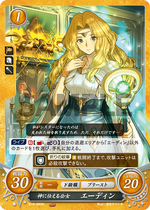 Edain most commonly spelled Etain, is the name of countless heroines and deities from irish mythology. It means "swift one" and "passion, jealousy". The first human race in Tolkien mythology is also called Edain.

The most common deities associated with the name are the irish goddess of sun, or a irish heroine that was in love with the fairy king Midir, thus arousing the envy of his first and rejected wife, who transformed her into a insect. In this form, Edain was swallowed by a princess of Ulster who gave birth to a daughter also called Edain. Edain can also be the mother of the legendary hero Cormac.

Her japanese name, Aideen is an alternate spelling of Edain.