Heir apparent of the Adrestian Empire

Student at the Officer's Academy
House leader of the Black Eagles

Cristina Vee (E3 2018 Trailer)
Tara Platt
[view]
“Such a brutal, irrational world we live in. Some believe the Crests, tokens of the Goddess's power, are necessary to maintain order. But they're wrong, Teacher. The Crests are to blame.”
—Edelgard speaking with Byleth

Edelgard is one of the protagonists and a playable character in the upcoming Fire Emblem: Three Houses. She is the princess and heir of the Adrestian Empire and a student at the Officer's Academy in Garreg Mach Monastery. She's also the house leader of the Black Eagles. She possesses a minor Crest of Seiros. Edelgard's birthday is June 22.

Edelgard has a dignified, high-minded, solemn air about her, and she coolly evaluates her surroundings and those around her before she acts.

Edelgard is illustrated in the trading card game Fire Emblem Cipher with the following cards: 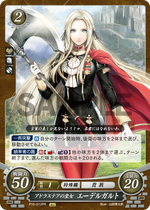 Hræsvelgr is a figure from Norse mythology who is a giant that takes the form of an eagle. 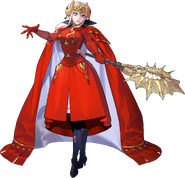 Artwork for Edelgard after the timeskip. 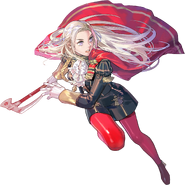 Artwork of Edelgard from the Three Houses cover.

Edelgard as a Noble by Kotaro Yamada.

Edelgard as a Noble in Fire Emblem 0 (Cipher). 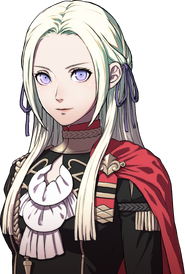 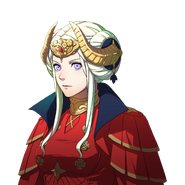