Myrmidon
[view]
“Look, I don’t know anything about kings, or nobles, or anything else like that. But you’re fighting because you believe it’s what’s best for Daein, right? And, well, that’s good enough for me. I’m with you, no matter what.”
—Edward to Micaiah in Radiant Dawn

Edward is a playable character in Fire Emblem: Radiant Dawn. He is a member of Daein's Dawn Brigade. He has a personal sword, Caladbolg, which he receives as a gift from Pelleas in Part III.

Prior to the formation of the Dawn Brigade and the events of Radiant Dawn, Edward lived on the streets of Daein with no family to take care of him. He managed to keep his cheerful personality despite his terrible status in Daein, but he would still leave this lifestyle behind in a heartbeat. Edward started training with a sword in hopes of joining the Mad King's War in order to move up in the world, but Ashnard's death put an end to that opportunity. Once the Begnion Occupational Army started to do as they pleased in Daein, Edward fled from town to town, managing to survive. Edward soon ran into Leonardo, who had become lost and cornered by the Occupational Army, and saved him from capture. Edward then taught Leonardo some basics for survival and Leonardo taught Edward some basics for fighting, and their friendship began to form and they became best friends. The two eventually met Micaiah, Nolan and Sothe and formed the Dawn Brigade to fight for a better tomorrow for Daein.

According to his Support with Tibarn, Edward has a younger brother.

When Daein assists Begnion with their battle against the Laguz Alliance, Micaiah gives Edward the Caladbolg, a treasured sword of Daein, from Pelleas out of gratitude for his help in liberating Daein. Edward is overjoyed that he has access to this sword and happily comments how he feels songs will now be written about him after the war. Later in the war Edward talks to Leonardo about his desire for the war to end and to live his life in peace. However Edward does not plan to leave the army during the war and hopes to convince Micaiah and Leonardo to leave with him once the war ends. Leonardo gives him a powerful sword, a tempest blade, and comments that since Edward is so reckless it is a perfect fit for him. Edward thanks Leonardo for spending so much money with Micaiah to get him this blade.

Once peace restores to Tellius, Edward leaves the army to live a more peaceful life. However, he does visit Micaiah, who is now the Queen of Daein, to bring her good news.

Edward is an energetic, although somewhat reckless, swordsman who is easily excitable. He is a very simple person and believes in Micaiah's oracles without question. He thinks very highly of himself and has a very cheery disposition, but he is very naive, as shown by his belief that if someone says to do something, then it is the right thing to do. Edward hates the wars following the one for Daein's liberation, and thinks that if he can convince the other Daein soldiers to leave, the war will end. He knows Nevassa like the back of his hand, and is very helpful to the Dawn Brigade. His best friend, Leonardo, tries to teach him a sense of responsibility, but Edward often ignores his efforts.

Edward has high growths in skill and speed, which is common for most Myrmidons. However, he has a 60% Strength growth, which is higher or on par with all other potential sword users, except for Elincia. He can be fragile during the Dawn Brigade chapters due to a 35% Defense growth, only second to Mia, and can be felled in two strong hits. However, once he promotes to Swordmaster, he becomes a force to be reckoned with, and while his Defense can still be lacking, he makes up for it with a high evasion rate. After promoting to Trueblade he, on average, caps HP, Strength, Skill, Speed, Luck and ends up with a decent amount of Defense. His weaknesses are Magic and Resistance, having only a 5% and 20% chance of growing in them respectively, but magic is not something Edward uses. His Resistace is poor, but as an excellent dodger, he will easily evade most magical attacks. Edward takes a lot of leveling to make him usable for the endgame due to his low level when he arrives, but as he starts in the Prologue of Part 1, he has all the Dawn Brigade missions to gain experience. Give him a support with someone whose affinity gives him good bonuses, and he will not disappoint.

Like the rest of the units gained in Part 1, the hardest part of using him properly is to sacrifice effort on the rest of your units, potentially allowing them to go untrained or undertrained. This is especially problematic with him, since most of the enemies he'll be fighting by 1-6 and beyond will be Soldiers and Armors in Part 1, and laguz and Halberdiers in Parts 3 or 4. A more serious problem is Hard/Maniac Mode, in which the weapon triangle is taken away, meaning he no longer has the advantage over axe users earlygame, and is completely at the mercy of the whims of Biorhythm. It will become tempting to just abandon him and put effort towards Nolan and Jill fulltime as a result, especially with Zihark around. However, Edward eventually gets his own advantage through Caladbolg, with its high power and +8 luck. Ultimately, the decision to train him is all up to the player.

“This is for the free people of Daein! Haaaa!”
—Edward
“Don't you idealistic twits ever give up?”
—Numida

Edward lived as a common townsman, despite the queen's wishes. He would often visit the keep to bring good news.

Edward is illustrated in the trading card game Fire Emblem Cipher with the following cards: 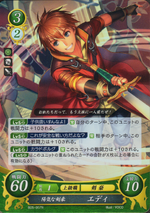 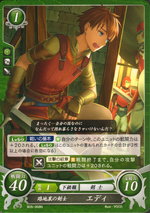 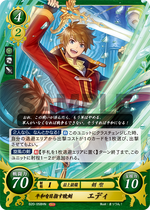 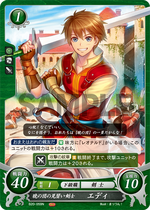 Edward is an English given name. It is derived from Old English words ead (meaning "wealth", "fortune" or "prosperous") and weard (meaning "guardian" or "protector").