Xanthe Huynh
[view]
“My blade, Lyfja, offers death to those who seek it. To those who wish to live, it offers compassion instead.”
—Eir speaking with Kiran

Eir is a character from Fire Emblem Heroes and the lead character of Book III. The daughter of Hel, she is a princess of the realm of the dead.

Prior to the events of Heroes, Eir carried thousands of mortal lives inside her, bestowed upon her by the dragon of life. This rendered her immortal, as she would resurrect each time she died. Her mother, Hel, who gains more power with each life she takes, saw this as a golden opportunity to strengthen herself. She thus took to killing her daughter repeatedly, eventually causing Eir to lose her immortality.

When the seal keeping Hel's forces out of Zenith weakens, Hel orders Eir to travel to the world of the living. Here, Eir is instructed to infiltrate the mortals' forces and gain their trust, only killing them when the opportune moment strikes. While reluctant, Eir follows her mother's orders. Secretly escaping her realm and confronting the Order of Heroes, she deliberately allows herself to be defeated. Following the battle, Eir is taken prisoner after Alfonse refuses her request to be killed.

As Alfonse prepares to meet with his father, Eir expresses her desire to fight alongside the Order. However, being the princess of the enemy's forces, her intentions are cast into suspicion. When asked to explain herself, Eir refuses to give an answer. Though Anna is wary of Eir, she ultimately agrees to her request, under the condition that Eir is to be killed the moment she displays any sign of betrayal.

Eir assists the Order of Heroes from here on, serving as a guide once the group makes its way into Hel. All the while, Eir tries to reason with her mother, to no avail as Hel gives Eir no other choice but to obey. She also comes into contact with Líf, wondering if he was sent to keep an eye on her. However, Eir begins to remember something, and wonders if they knew each other before. Líf disregards this and asks her to forget about it. In the alternate Askr, Eir once again confronts Líf, stating that she's close to remembering something dear and inquiring about the flowers he put together in a memorial. Líf states the same thing that he did before, even suggesting that Hel erase those memories, before he leaves her again. Eir takes note of the sadness on his face as he does.

It's eventually revealed that Eir is not Hel's actual child, but the daughter of two Dragon people. Hel killed Eir's biological parents for power, then took Eir in as her daughter for her own purposes. She pretended to be nice and kind to her before she began to abuse and kill her repeteadly, so she'd be able to make Eir love her no matter what.

A forlorn individual, Eir shows very little emotion and in a constant torpor. This is reflected in her sprites which has very subtle differences in her facial expressions aside from her pained expression. Due to the experience of dying and resurrecting repeatedly, Eir is often apathetic about the death of others or herself, and goes further by explaining that people who suffer from disease or unending pain would consider death a kindness. Still, she finds her mother's increasing mercilessness toward the living disquieting, as she is much more compassionate than her and vaguely recalls that she used to have a much warmer disposition.

That, along with the fact that she never had friends while living in Hel, and even went whole years without speaking, makes Eir seeks purpose for her life, and wants to do so by making someone other than herself smile to be and experience the happiness that she once had. This is proven during the Alliance of Princesses Tempest Trial, where she is happy to have befriended Fjorm and Sharena, who consider her a friend despite being a former enemy.

Merciful Death
Princess of Hel, the realm of the dead. Dearly loves her mother, Hel, who rules it. She finds Hel's increasing mercilessness towards the living disquieting.

Eir introduced a new line of Heroes called Mythic Heroes which makes her well suited for Aether Raids while still being functional in Arenas as well. Her offense is solid, most notably having a reasonably fast 37 neutral Spd which scores doubles decently on many units, especially with her 46 neutral Atk. Her other notable stat is her Res, reaching a neutral 34, which in combination with her base kit skills, can easily allow her to check many powerful mages and magic damage dealing units like dragons.

She occupies an underrepresented unit type being the second Flying Dagger unit, thus giving her access to great mobility and utility as a debuffer with her personal weapon Lyfjaberg, which grants a Swift Sparrow 2 effect as long as her health is over 50% plus a -7 to her target's Def/Res after the battle resolves. Though Eir takes 4 damage if she was buffed prior to attacking, the benefits of the weapon heavily outweigh the costs. Her stats favor offense and even boasts great Res to challenge mages and empower her Iceberg special. Her only downside is low physical bulk which comes at a cost of a noticeable weakness to Bows. However, that aside, Eir's offensive might helps to cover that.

Eir packs Swift Sparrow thus essentially has the effect twice when initiating combat with the skill and her Legendary Weapon. Mystic Boost cancels defense stat calculating weapons, most notably Breath weapons, forcing them to target Eir's much higher Res, making her a potential Dragon counter as well as stopping Wrathful Staff attacks. Finally her unique Sparkling Boost heals 10 HP to the ally with the lowest HP, which means free healing for allies. This skill is a great skill for long battles, including Tempest Trials and even Story Modes. However, caution must be taken when putting Eir on a team with this skill as it can inadvertently push units who rely on damage for their skills to activate out of the range. Eir was completely reworked as the 1st Mythical Hero to be Remixed. Sparkling Boost+ doubles the health her allies regain, and grants them 5 points of Resistance if their health is up to half of it's total, and Attack Resistance Unity is her new A set Skill. Her Weapon Refined now also boosts her defensive stats with the offensive, expands the range of it's activation to at least 25% of her total HP and she doesn't get post-combat damage, rather, she gives a Guard effect to her target, alongside the follow-up negation that comes with her speed outmatching the foe. The Dagger 7 effect remains, and the special refine gives her another +4 to all stats and a bonus to her attack and resistance equal to a fifth of her current HP, and her allies regains 7 points of health post-combat alongside her. Her new skill set may change many Aether Raids defenses, but overall, it's a welcoming change.

Eir's abysmal physical bulk leaves her extremely vulnerable to Bows who all can dispatch her through it. Otherwise, nearly any other strong physical attack can easily blow through her with little effort even without effective damage. Both versions of Mage Robin and Lyon negates her power and boost their own if they run Triangle Adept.

Eir can effectively work with her base kit requiring only Reposition for her Support since she has none and that is the standard skill for any Flying unit. Moonbow can be considered to pierce through high bulky enemies, though she will most likely only be using it when facing a Dragon or a bulky Mage due to the safer matchup than facing a Physical bulky unit. A Solo skill allows her to be more independent and use the boost regardless of the turn.

Renewed Life
Princess of the realm of dead. Is both delighted and confused by her first New Year's experience.

Eir is illustrated in the trading card game Fire Emblem Cipher with the following cards: 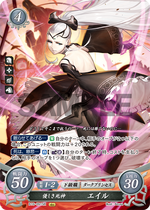 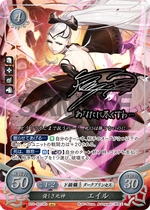 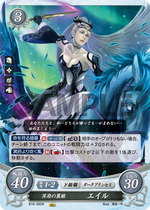 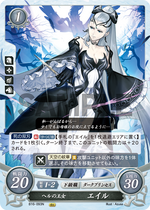 In Norse Mythology, Eir is the goddess of healing and medical skills. She's also known to be one of the handmaids of Frigg.