Elbert (エルバ－ト Erubāto) is a playable character from TearRing Saga: Berwick Saga. He is a knight of Chinon, serves as Ward's second-in-command and is revered as a big brother by the younger knights.

Elbert is, to put it bluntly, one of the best characters in the game. When he joins he is already more powerful than anyone except Ward and his good growths make screwing Elbert hard. He only has a few skills, but they are good, especially Provoke that, with proper usage, can save a lot of lives. His bulk is also very impressive with solid bases and good shield accuracy, which is boosted even higher when he learns shield mastery. In addition to this, his speed is pretty impressive as well, and combined with the skill he learns, dodge arrow, Elbert can start eliminating crossbowmen with ease. Players can also make use of all of his skills by provoking ballistae, which forces them to target him, which will either miss him due to dodge arrows, or do very little damage with his bulk and incredible shield accuracy.

Elbert has only one disadvantage - low spear skill growth, and requirement to reach 20 spear skill to promote, so it is a good idea to have him use only spears until he reaches that point. It is also suggested to use him almost as a mini-Ward early on in the game by having him weaken enemies for other units to kill. This works well as it allows him to get more hits in with spears to raise his rank and he does not receive much exp anyway due to his starting level. Overall, Elbert is one of the most reliable units in the game for being a free unit with amazing stats, nearly perfect availability, and solid skills, but is slowed by his low spear growth, which is needed for his promotion.

Elbert's portrait as a Paladin

Elbert as a dismounted Sergeant Knight. 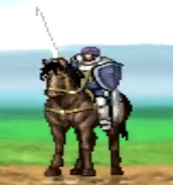 Elbert as a mounted Sergeant Knight.
Add a photo to this gallery