Chapter 1: Girl of the Spirit Forest (Fought in Chapter 3: Lionheart Eldigan) (Genealogy of the Holy War)

Greg Chun
[view]
“A war now would incur huge sacrifices on both sides! Our past is a testament to that. The noble class aren't the ones who suffer in the end. It's the powerless citizens who suffer, and I'm not about to let it happen!”
—Eldigan to Elliot.

Eldigan is a non-playable character from Fire Emblem: Genealogy of the Holy War. He is the commander of the Cross Knights and the lord of Agustria's House Nordion during the first generation. As a descendant of Crusader Hoðr, he wields the powerful "Demon Sword" Mystletainn.

Eldigan shares many similarities with Camus from the Archanea Series and is thus considered part of the Camus archetype.

Eldigan is the older half-brother of Lachesis, and a close friend to Sigurd and Quan, both of whom he first met at Belhalla's military academy. He is also the husband of Grahnye and the father of Ares, both of whom move to Leonster to stay with her parents before Agustria enters a war against Grannvale.

Eldigan is extremely loyal to the Agustrian royal family, as his ancestors inadvertently inherited Hoðr's Holy Blood through Hoðr's daughter, who was married off to Nordion. They thus swore to utilize the powers of the Mystletainn to protect the royal family. King Imuka was a mentor and close friend of Eldigan, particularly in the latter's youth.

While Sigurd is residing in Evans Castle during his invasion of Verdane, Eldigan pays a visit to him in which he promises to watch over Evans while Sigurd marches deeper into Verdane. Shortly thereafter, Prince Elliot of Heirhein moves out to capture Evans, but he is stopped in his tracks by Eldigan and the Cross Knights. Sometime later, Eldigan decides to travel to Agusty in order to convince Chagall to end his military buildup, despite Lachesis's warnings. This results in him being arrested by Chagall, but he is later released when Sigurd conquers Agusty. When meeting with Sigurd, Eldigan tells him that he has one year to restore the peace and leave Agustria. During the next six months, Eldigan resides in Madino Castle with Chagall, while he leaves the Cross Knights at Silvail, prepared to take out Sigurd if he breaks their agreement.

After Sigurd is forced into a battle against Chagall's forces and wins, Eldigan finally decides to lead the Cross Knights against Sigurd's army due to his immense loyalty to his country. As the two armies clash, Lachesis pleads with him to stop the senseless fighting and convince Chagall to accept a truce.

Moved by his sister's pleas, Eldigan gives his prized Earth Sword to her as a memento before departing from the battlefield to reason with Chagall, telling the last heir of Hoðr it is too dangerous to fight against Grannvale right now and that it is best to go into hiding for his and Agustria's safety. However, the king refuses to listen to him and has him executed for treason.

Eldigan is an extremely honorable knight who holds his oath above all. Unlike many Agustrian nobles such as the greedy Macbeth and hothead Elliot, Eldigan understood the pain and suffering that war brought to the people. Eldigan treated the cross knights like family and in his last battle thanked them for their years of loyalty.

Eldigan was a close friend of Sigurd and Quan since their days at Belhalla. Though during the Grannvale occupation of Agustria, Eldigan felt that despite Sigurd's best intentions, he couldn't stop Grannvale's true intention of taking over the country. In his final battle with Sigurd, Eldigan understood they were only at odds due to their mutual knightly oaths to their countries.

Due to both his royal oath and friendship with Imuka, Eldigan was eternally loyal to Chagall, feeling Agustria would be doomed if the last heir of Hoðr was killed.

Eldigan appears twice on the battlefield: once during Chapter 1, and then later on in Chapter 3. In Chapter 1, he is an ally of the player's, and alongside his troop of Cross Knights, makes short work of Elliot.

In Chapter 3, however, Eldigan will be forced to turn against the player. Despite not possessing any skills, Eldigan is extremely difficult to defeat due to his 5-Star Leadership and the powerful Mystletainn. It is thus highly recommended to have Lachesis speak with him in order to receive the Earth Sword, and more importantly, get Eldigan to leave the battlefield.

Savvy players might recognize that there is a third option for dealing with Eldigan: it would be theoretically possible to lure him away from Silvail in order to seize the castle without killing him. Doing so will cause Eldigan, like all on-field bosses whose castle has been seized, to vanish without a trace. As much as the player may wish to spare Eldigan, this will have no impact on the plot, and will also prevent the player from acquiring the Earth Sword or Life Ring.

Lionheart
Ruler of Nordion. Wields the Demon Sword in knightly devotion to any master. Older brother of Lachesis. Appears in Fire Emblem: Genealogy of the Holy War.

Strutting Lion
Young ruler of Nordion. Also known as the Lionheart. Sets out for the dance festival in dignified attire. Appears in Fire Emblem: Genealogy of the Holy War.

Genealogy of the Holy War[]

Once Sigurd and Eldigan get near each other:

“This is the Demon Sword, Mystletainn. If you don't wish to become its prey, then don't come anywhere near me...”
—Eldigan's battle quote

“Forgive me... Agustria...”
—Eldigan's death quote in Genealogy of the Holy War.

“I swear to serve you well.”
—Eldigan's recruitment quote in Infinite Regalia.

Eldigan is illustrated in the trading card game Fire Emblem Cipher with the following cards: 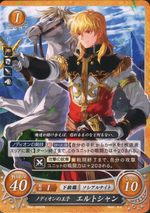 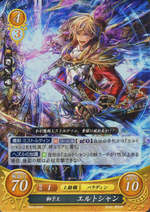 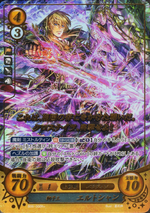 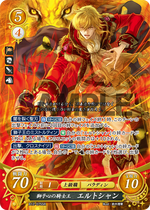 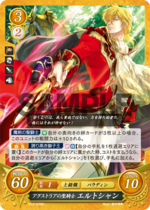 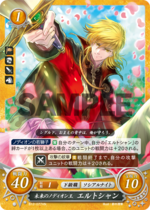 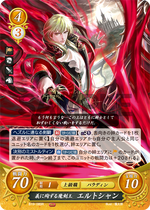 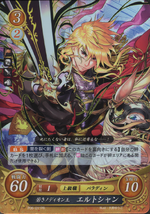