Priest
[view]
“I am the cleric, I am the one who is supposed to listen to you and relieve your stress...”
—Elen in a support conversation with Melady in The Binding Blade.

Elen is a playable character from Fire Emblem: The Binding Blade. She is Princess Guinivere's loyal attendant.

Elen is a Priest from the St Elimine church, who serves as the lady-in-waiting to Guinivere, the princess of Bern. She assists Guinivere on the escape from the Bern's castle, to seek aid of foreign kingdoms to prevent the war that King Zephiel was planning. Elen accompanies her lady on this secret journey, however, she and Guinevere were captured while on their way to Lycia.

Near the beginning of the story, Elen manages to escape from her captor, Rude, who had taken both her and Guinivere as hostages. Although, during the flee, she is surrounded by enemies again, but she meets Roy, and enlists his help to save her own life, and rescuing her princess Guinivere. Despite being hesitant, since Roy is from the enemy kingdom, she offers to use her healing staff for this cause.

Elen's condition and plea is a key factor that made Roy and his army to consider ending the conflict as quickly possible, as it made them realize that not everybody from Bern desired war. When the group marches to the Western Isles, Guinivere is left to Cecilia's care as their mission in the place was too dangerous and the princess' life could be at risk. Elen though, choses to stay and fight for Roy's army, and she accompanies the group through the entire campaign, even when her lady, Guinivere, is found by Zephiel's army and taken back to Bern.

Elen and Zeiss grew up in the same hometown. In their support conversations, it is revealed that she is rather shy around men. She has lived peacefully in her monastery, until she witnessed her homeland sins before her very eyes. She also cares for children, and became very worried when she saw Raigh in the battlefield.

In the end, after the war, she returned with Guinivere to Bern and helped to restore the lands destroyed by the war. She eventually became known as the 'Saint of Bern'.

Elen is a pious and modest woman with a strong faith, which came about by having lived in a monastery. She has a vast knowledge on medicinal plants, implementing her herbalism skills to heal the wounded or sick. She also shows a slight dislike towards men, being rather uncomfortable and shy around them.

Bern and Lycia are technically kingdoms at war, and therefore Elen was hesitant towards Roy and his companions in the beginning, despite seeking their help to rescue her princess. Despite that, she is eventually able to find a place in the army and the battlefield out of faithfulness on her own beliefs. She acts calmly and graciously when she is met with hostility due to being native of the enemy nation, as it's shown in her conversation with Chad. And above of all, Elen is very faithful to Guinivere, trusting her lady's decisions and being her loyal companion.

Elen is the first playable healing unit in Binding Blade, and thus plays an important role as the team's only medic until Clarine joins in Chapter 4, however this is unfortunately her only niche in the game, with her being overshadowed by every other healer who joins later than her in at least one area right up unil the game's closing chapters. Saul joins soon after Elen in Chapter 6 with better base stats, slightly higher speed and bulk, and a better Staff rank, Clarine also joins with similarly low magic, but with a mount giving her a 2 movement advantage over Elen, and Cecilia who joins in the mid-game with all of these aforementioned strengths; pre-promoted base stats, good weapon ranks and a mount.

If the player sticks with Elen for the duration of the game, they will be somewhat compensated with a high utility Bishop, due to her high magic growth, and high staff rank by that point in the game, however even in this role she has to compare to Niime, who joins in the late-game with a huge 21 Magic and A weapon ranks, albeit very frail.

In the end, while Elen is definitely a usable unit, there are much better options even within a few chapters after her recruitment. However, if the player desires a second healer, she isn't so much worse than Saul or Clarine as to be incapable of doing her job.

“Princess Guinivere... Please... Don't give up...”
—Elen's death quote in The Binding Blade.

“Saint Elimine… Give us strength!”
—Elen's final battle quote in The Binding Blade.

Conversation vs Oro in Chapter 11A

Oro: What of them? Anything can go unpunished...if done in the name of the gods!

Elen: There is no salvation for you...

Elen - Saint of Bern (ベルンの聖女 Berun no seijo lit. Holy Woman of Bern)
"Elen returned to Bern with Guinivere to rebuild a land ravaged by war, and to reunite a people devastated by defeat. Her hard work and kind-hearted nature earned her the title, 'The Saint of Bern.'"

Elen is illustrated in the trading card game Fire Emblem Cipher with the following cards: 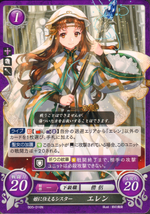 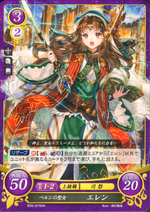 Saint Elen is a deity from Welsh Mythology, she is the 4th-century founder of churches in Wales, her story is told in The Dream of Macsen Wledi.

Elen as a Cleric in Fire Emblem 0 (Cipher).

Elen as a Bishop in Fire Emblem 0 (Cipher).

Elen's portrait in The Binding Blade.

Elen as a Priest in The Binding Blade.