Eleonora is a seventeen-year-old (sixteen in the Japanese version), half-Japanese half-Scandinavian girl who aims to be a star in Hollywood. She is a young up and coming actress as well as a Mirage Master. Her birthday is January 29. Eleonora joins the party when the others go to rescue Barry Goodman, surprising them when she reveals she already has a Mirage Partner. She initially starring in a new drama "Dandelion in Love", but it hasn't been getting good ratings where her character is in love with the idea of love. It eventually rebranded into a horror "Horro Hunter Angel" with Kuen Tarachino as showrunner with her character eventually become the heroine who hunts monsters. Eleonora's drive to make it to Hollywood stems from her insecurity from being biracial as she feels it makes her stand out and believes becoming a Hollywood star would allow her to find her own place. 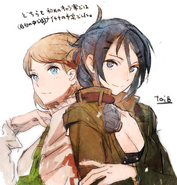