Chapter 10A: The Resistance Forces/10B: Caught in the Middle (first joins in Chapter 11A: The Hero of the Western Isles or 11B: Escape to Freedom)

Elffin is a playable character in Fire Emblem: The Binding Blade. He is a bard who fights for the rebellion in the Western Islands. He joins Roy's army when they save the villagers from the corrupt Etrurians and their hired bandits.

In the army, he can play the role of a fortune teller or of a Bard depending on the route.

In reality, he is Myrddin, the crown Prince of Etruria and only son of king Mordred. When he was a child, Klein used to visit the royal palace frequently, accompanying his father Pent and the two quickly became close friends. Myrddin was a bit older and naively wanted Klein to be his brother, so he ordered his friend to live in the royal palace, but Klein refused, for he had wanted to be his knight.

Years later, Myrddin was said to have died by falling from horseback. However, the prince did not actually die. He was hit by a poisonous arrow in an attempted coup, but he survived with the help of some villagers. Living as a civilian, he adopted the name Elffin, and started to work as a bard. The poison blinded him for months and eventually still causes him to lose his vision for moments.

In his life in the Western Islands, he experienced the suffering of the common folk under corrupt Etrurian nobles, and so joined the rebel forces. Fighting alongside the villagers made him question his previous role as a prince, making him reluctant to return to Etruria and succeed the throne.

He first meets Roy while they both save villagers in the Western Islands from Etrurian bandits and thereafter joins his army. Originally, he hides his true identity from Roy, instead posing as a simple bard. His father, King Mordred, still grieves the death of his son and is not aware of his survival. Despite this, he refuses to contact his father, as he doesn't see any reason to reveal his true identity until the war is over.

He only reveals who he really is to a few people, including general Douglas and his best friend Klein. General Cecilia recognizes him, but he denies that he is the prince. Eventually, he is forced to admit his true identity to her because she is aware of a scar on his right shoulder.

if Larum is chosen as the refresher of the army instead, he plays the minor role of a fortune teller.

Once the war was won, the prince announces that he is alive, and returns to his kingdom of birth after promising to support Roy as the new leader of Elibe.

Elffin is dignified, calm, and courteous. A talented harpist, his songs are noted to be extremely beautiful. Elffin is also both androgynous and dainty, with the combination of his hair and scent confusing Fae, who believed he was a girl since he was too 'pretty.'

He is very cultured and has a vast knowledge of history and politics, as a result of his royal upbringing. He is also very secretive of his identity, being invested in keeping his disguise to the point of avoiding contacting his grieving father; and asking for the few ones aware of who he really is to drop honorifics and treat him as a simple bard.

Being raised as crown prince, his royal status made him considerably alienated from the suffering of the common people. During the years he was disguised as a bard, Elffin was able to witness the misery that the civilians endured under the oppression of the landlords of Etruria. The time he spent with the rebels provided him a better understanding of his people and contributed to his desire to become a fair ruler.

Elffin is not prideful and does not seek any recognition for his deeds, as he is prone to stay out of the spotlight and recognizes his own limitations. As the war unfolds, Elffin realizes that Roy eventually surpassed him in political and warfare matters. This made him realize that the youngster would be a better leader than himself, resulting in him affirming that he would support Roy, who should be the one to be the leader of Elibe once the war is over.

Description: A mysterious bard who supports the resistance on the Western Isles.

Elffin's purpose is the same as Larum, to refresh units so they can move again. While he doesn't possess high stats, as he should always be refreshing, then Rescue dropped out of range to keep him alive.

As a Dancer or Bard can enable many interesting strategies, like having an extra Warp use, having a unit attack with a long-range tome and use a status staff in the same turn, move further, and many more things, making him one of the most useful units in the game.

Elffin - Seer of Truth (真実を見る者 Shinjitsu wo miru mono)
"After the war, Elffin disappeared without a word. Several months later, an official announcement was made in Etruria that Prince Myrddin was alive. The prince that hid his identity to help General Roy in the war... That story is now a favorite among bards and writers."

He makes a cameo appearance in chapter 18 of the Hasha no Tsurugi manga.

Elffin is illustrated in the trading card game Fire Emblem Cipher with the following cards: 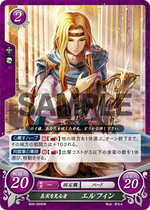 Myrddin is a prophet from Welsh legend who is considered the most important prototype for the modern image of Merlin.

Artwork of Elffin in Fire Emblem 0 Cipher by Sachie.

Elffin as a Bard in Fire Emblem 0 (Cipher).

Elffin's appearance in Hasha no Tsurugi.