Elibe (エレブ Erebu, Ereb in the Japanese version) is the fictional continent which serves as the setting of Fire Emblem: The Binding Blade and Fire Emblem: The Blazing Blade. Elibe mainly consists of 5 countries, the desert peninsula of Missur, the lone isle Valor and the Western Isles.

In the distant past, the dragon tribes shared the continent with humanity and lived separately in peace. Unfortunately, this peace was not slated to last. While the exact details of the war's beginning are lost, it is known that humanity was the initial perpetrator of the war, with the Divine Dragon Tribe choosing to remain neutral throughout the conflict.

The war, which is better known as The Scouring, broke out thereafter and lasted for generations. During the war, the dragons possessed every possible advantage over the humans, save for one: the ability to efficiently reproduce. In order to gain the upper hand against the numerous humans, the dragons requested the aid of the Divine Dragons, but when they refused to take part, the dragons captured the Divine Dragon girl Idunn and transformed her into the Demon Dragon. They also destroyed Idunn's soul and gave her the ability to spawn War Dragons. Doom drew nigh until man combined their might to forge the legendary weapons. The Legendary Weapons were infused with a special power to destroy nearly any kind of dragon, so they had the power to easily pierce a dragon's iron-hard scales and withstood their attacks. Thus, the Eight Heroes used the weapons against the dragons in The Scouring.

However, there was a side-effect to the eight weapons that neither party expected. The amount of power of the clash between the eight weapons and the dragons was so tremendous that the laws of physics were bent, causing severely erratic disruptions in the seasonal changes of the world's climate and making the land of Elibe horribly imbalanced as a result. In the catastrophe known as the “Ending Winter”, nature balanced the equation by drawing much of the potential magic energy out of the universe, making it difficult for dragons to maintain their colossal forms and forcing them to conserve their power in stones to survive. This was a boon to humans, however, and so they paid the situation little heed at the time, using the Ending Winter as a chance to win the war.

Having lost the war to mankind, the dragon tribes fled the world through a portal known as the Dragon's Gate. Those who were unaware of the gate's existence unwittingly remained on the continent, only to be routed by humanity, barring one. The only dragons to remain on the continent were the Divine Dragons and allies who formed the hidden civilization called Arcadia, where humans and dragons cohabited in a desert utopia in peaceful bliss.

After the war, the humans found that the weapons were indeed responsible for the calamity, and that their power was too great to be used by mortals. Fearing that the weapons might end the world entirely, the eight legendary weapons were hidden across Elibe when the heroes departed to found their own nations. Each one was hidden in the most difficult places to access, all with deadly traps guarding them. On top of that, Bramimond crafted a magic seal in a place in Bern known as the Shrine of Seals that would prevent the weapons from ever being found.

Founded by Hartmut the Hero, leader of the Eight Legends of Elibe, the monarchy of Bern is one of the most powerful military nations, having a large military force. Wyverns are native to this country. It is also the resting place for the Fire Emblem, which serves as Bern's national treasure, and it is also where the Shrine of Seals is located. Hartmut's Divine Weapon, the Royal Blade Eckesachs, as well as the almighty Binding Blade, reside here.

Founded by St. Elimine, one of the Eight Legends, Etruria is one of the largest nations in Elibe and the most advanced civilization, rumored to rival Bern in military strength. The St. Elimine Church is based in this country, the source of the religion mostly popular in Etruria and Bern. Like Bern, it is also ruled by a monarch. The largest city and capital is Aquleia. St. Elimine's Divine Weapon, Aureola the "Pinnacle of Light" and the Saint's Staff reside here.

Founded by Roland the Champion, one of the Eight Legends, Lycia is geographically located in the center of Elibe and is home to every playable lord in both games. It is made up of a federation of numerous territories, each ruled by a powerful Marquess, and those leaders form a council which governs the country. The most powerful territory is Ostia, which leads the council as the ruling territory. Lycia later unifies into one kingdom, if certain conditions are met, after the events of Fire Emblem: The Binding Blade. Roland's Divine Weapon, Durandal the "Blazing Sword", resides here.

Founded by Barigan the Holy Knight, one of the Eight Legends, Ilia is the northern-most nation in Elibe and is described as a snowy and mountainous wasteland which cannot support farming very well. Most people become mercenaries to survive while there are some who become scholars. The largest city and capital is Edessa. Pegasi are native to this country. Barigan's Divine Weapon, Maltet the "Lance of Ice", resides here.

Founded by Hanon the Divine Trooper, one of Eight Legends, Sacae is a vast, open plain country of nomads. There are three main tribes of nomads in Sacae; the Kutolah, the Djute, and the Lorca tribe, although most of the Lorca were killed off before the events of Fire Emblem: The Blazing Blade. The largest city and capital is Bulgar. Nomads and Myrmidons hail from this country. Hanon's Divine Weapon, Mulagir the "Gale Bow", resides here.

Settled by the barbarian clans under Durban the Berserker, one of the Eight Legends, the Western Isles are an archipelago of 3 major islands off the coast of Etruria, mainly colonized by the Etrurians. The largest city and capital is Jutes. It is rich in minerals and resources, although piracy and banditry often occurs in the country. Durban's Divine Weapon, Armads the "Thunder Axe", resides here.

The Nabata desert is located on Missur, a desert peninsula at the southwestern corner of Elibe. It is a desert wasteland, but it is rumoured that a secret village in the desert called Arcadia shelters a coexistence of dragons and humans. Athos the Archsage, one of the Eight Legends, took refuge in the desert after the events of the Scouring. It was here that he met Nergal and discovered Arcadia. His Divine Weapon, Forblaze the "Infernal Element", resides here.

Also known as the Dread Isle, Valor is located to the south of Lycia and is home to many mysterious ruins, including the Dragon's Gate. It was here that another of the Eight Legends, Bramimond the Enigma, sacrificed their humanity in order to gain the power of Apocalypse, the "Silencing Darkness," and bested Dragons. This was the original location of Bramimond's Divine Weapon before it was hidden under the Shrine of Seals in Bern with its creator. 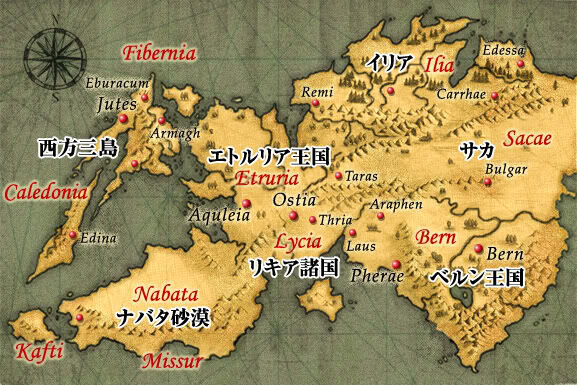 'Elibe' is the romanized form of the original version of the continent's name (エレブ or Ereb the Dark Continent). This relates to the Greek 'Erebus', which refers to the Greek underworld. It means 'darkness'. Erebus was also a primordial Greek god who personified darkness.

The countries of Elibe seem to be arranged in a manner that evokes the real-world Mediterranean, with Etruria (Italy) on the west, Ilia (Troy) to the northeast, and Lycia (Greece) in the middle. In this way, Nabata Desert would evoke North Africa.

The geography can also be interpreted as all of Western Europe, with Etruria (France), Ilia (Scandinavia and Russia), Lycia (Nothern Italy), Bern (Austria and Hungary). Nabata would mirror Spain, and the Western Isles would mirror the British Isles. Sacae could repersent the Bulgarians.

Caledonia was an old name for modern day Scotland during the Roman Empire era. Hibernia was the name for Ireland, and possibly the origin for the game's island of Fibernia.