[view]
“If something befalls Father, Marth will become the last person in the entire world worthy of wielding the Falchion. I want you to guide him, Malledus, even when the rest of us no longer can.”
—Elice to Malledus in Shadow Dragon

Elice is a playable character from Fire Emblem: Shadow Dragon and the Blade of Light, Fire Emblem: Mystery of the Emblem, and their remakes.

Elice is the daughter of Cornelius and Liza and the older sister of Marth. When the Dolhr Empire attacks Altea, she chooses to stay with the Altean people and sends Marth and later Malledus away so that they can survive. Ultimately, she is captured by Gharnef, who wants to use her to gain access to the Aum Staff. After Gharnef is finally defeated, Marth frees her and she joins the Altean army.

During the fall of Altea in Mystery of the Emblem, Elice offers herself to the Archanea Empire as a hostage so that Caeda can escape and reunite with Marth. She is eventually taken by Gharnef and almost sacrificed to resurrect Medeus as a Dark Dragon (alongside Lena, Maria, and Nyna). However, she is returned to her own self by Merric, who has romantic feelings for her. In the ending, she moves to Pales with Merric.

According to the Takayashiki Hideo's Mystery of the Emblem novel adaptation, Elice is 22 years old.[1]

Elice is a calm and composed woman who cares deeply for her younger brother Marth and both of her parents Liza and Cornelius. Elice is very practical, even in emergencies, recognizing that Marth was the only one who could slay Medeus, so she risks her life by staying in Altea to safeguard Marth's escape into Talys and later tells him that she was 'ready for the worst' if that is what was needed to get him to safety.

Note: Relevant in Book 1 only

*Dropped if defeated as an Enemy.

In Shadow Dragon, Elice joins one chapter before the endgame (if Chapter 24x is to be visited, then two), with low bases and is under leveled; however, Elice has some of the highest growth rates of any initial magic user in the game, with her magic growth being rather low in comparison. Unfortunately, her availability is severely limited due to her extremely late entry, especially since her only chapter before the final battle if not recruiting Nagi is commonly skipped by warping Marth to the castle during turn one. However, even if not trained, she will easily be an able healer as she enters with an A in Staff Mastery (despite having no starting staves), allowing her to use useful staffs like Warp, Fortify and Recover.

Elice is a high enough level to use a Master Seal, but using one will usually not improve her too much aside from allowing her to die less quickly from long range attacks. While her bases are not strong enough for a physical class change, the Sage class is a good option for her if the player wishes for her to be a more offensive unit or heal more damage with the Fortify-staff, even though her magic growth and base aren't really good and she'll start off with a D-rank in tomes.

Thanks to her high staff rank, she is the ideal candidate to use the Aum Staff, though Maria (and Caeda and Minerva if reclassed) can use it as well. This makes her a well-appreciated addition to your troops during the final chapter, since using Aum allows you to easily defeat Medeus in one turn by letting Tiki or Nagi attack him, reviving them when they die to his counter-attack, and then finish him off with your second attack.

So despite her late entry, Elice will be a useful addition to your army, mostly by using powerful staffs to support your main army, and for more patient players even as late-game mage.

Life-Giver
"Elice returned to Altea with Marth. Ever serene, she stood by her brother and watched him grow into a fine leader."

Life-Giver
"Elice helped to establish a magic academy in the palace. She married soon after, and lived out her days blissfully..."

Elice is illustrated in the trading card game with the following cards: 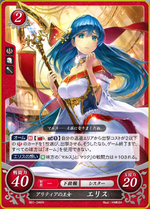 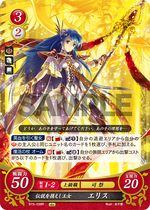 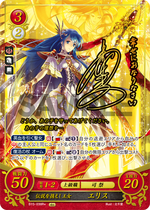